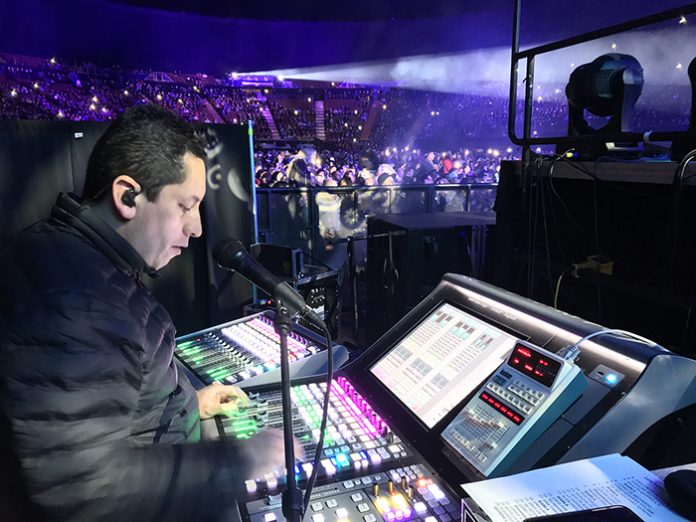 Los Temerarios are one of Mexico’s biggest bands. With a career spanning over 40 years and 20 albums, the Grammy-nominated act is still selling out arenas across the globe, attracting over 10,000 fans to each show. To ensure the best audio production for each show, revered FOH live engineer, Juan Payan, decided to take the new SSL L100 on the road for their new tour. With Payan’s partner in sound, Juan Carlos Granados, also on an L100 at monitors, everything is sounding and performing better than ever before.

It was through a training event with SSL’s live specialist Fernando Guzman, that Payan first heard the SSL L100 in action. “It was during this event that the sound of the console immediately impressed me. I knew I needed to have one,” Payan explains. “I’ve had it out on the road with me since February, and everything has been working perfectly – no issues at all.”

Payan says it was a combination of factors that drew him to the console, from the dynamics to the overall sonics. “I don’t need to touch the gain, because it instantly sounds amazing. The separation I can get between the instruments allows me to generate real width in my mix,” he said. Payan is running 52 channels at FOH, and the band is a seven-piece. A big sounding band needs a big sound and he is able to achieve that thanks to the SSL.

“The EQ is also amazing – as soon as you dial it in, you can tell it’s very reactive and easy to tap into any frequency. Plus, I use the SSL reverbs on my drums and vocals, and I utilise the delays a lot across the console.”

“Everything that comes through this console is clear and there is no muddiness whatsoever,” Payan insists. “It’s way better sonically, and I am getting much more clarity than I was when using my previous console. I also multi-track each show using Pro Tools, and the quality of the recordings now are very impressive.”