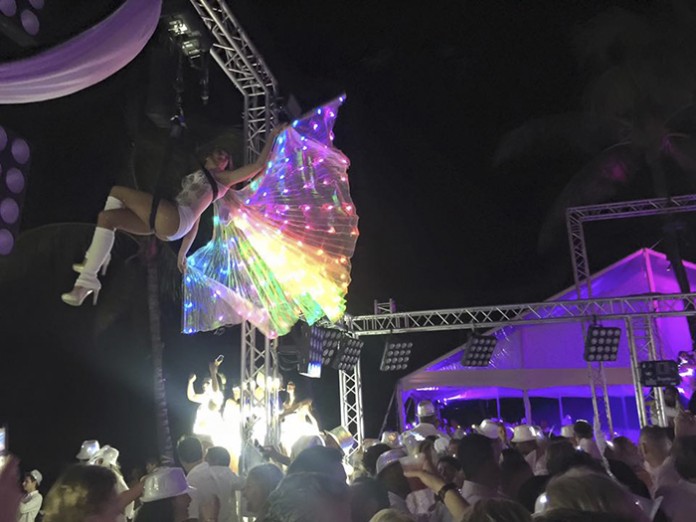 Sitting down to design the lighting rig for the Albany resort’s White New Year’s Eve Party, Paul Francis Aranha and his team repeated the same vow that they’ve been making every year since they began working on the annual event in 2011.

Their vow: find a way to make this party more visually exciting than the last. This year, the team upped the excitement level in emphatic fashion by calling on the brilliant output and intense colours of Nexus 4×4 panels and Rogue fixtures from Chauvet Professional.

“Albany Resort and Spectrum Light & Sound are always looking for new ways to ‘wow’ guests at this party,” said Aranha. “It’s been that way from the beginning.”

Finding new ways to wow people is always a challenge, but it’s a particularly tall order when working at a world-renowned destination like Albany Resort. Described by Forbesas as “the most exclusive resort in the Bahamas,” this 600-acre island paradise includes five-star restaurants, $6,000-a-night poolside condo units, over 70 deep water slips for 300 yachts and a world-class golf course designed by local resident Ernie Els, who can sometimes be seen golfing there with a neighbour, Tiger Woods.

There isn’t much that the international A-list Albany guests haven’t seen. Impressing them is no easy task, but the 700 guests at the All White Party (so named because everyone was asked to dress in all white) were impressed as soon as they entered and were greeted by the output of 20 Nexus 4×4 panels.

Aranha arranged the Nexus fixtures around the dance floor on an outdoor truss rig, positioning them so they faced the island’s clubhouse. “We used the Nexus panels to create atmosphere and a wow effect for the guests as soon as they entered,” he said.

“The panels gave life to the dance floor and helped create the baseline energy required to set the dance floor off, once guests finished eating. During the night they were used as blinders, strobes, and for the countdown to the New Year.”

Contributing to the energy on the dance floor were eight Rogue RH1 Hybrids and 16 Rogue R2 Spots, positioned alongside one another to create a variety of looks. “The Rogues gave us versatility” said Aranha. “Our lighting designer could go from all spots to mixing beams and spots, reflecting different moods and keeping the dance floor dynamic.”

In addition to the Nexus panels and Rogues, the White Party rig included a collection of 100 COLORado fixtures used to provide lavish colour washes, as well as two Amhaze haze machines and 12 Vesuvio water-based LED foggers for atmospherics. The lights were controlled with a grandMA2 board and linked with five-pin DMX and Neutrik powerCON.

“The concept we went for with this rig was to capture the incredible energy that the Albany crowd brings to the party and build on it,” said Aranha. “By surrounding the dance floor with lights, strobes and atmospherics, we provided the guests with a truly immersive experience.

“Essentially, this allowed the resort to bring a nightclub experience to an incredible white sandy beach in the Bahamas lined with palm trees. Through months planning and effort, the Albany White Party has established itself as one of the go-to New Year’s Eve party’s in the world.”

Amazingly, the entire lighting and sound rig for the party had to be set up within a 24-hour timeframe, since the resort wanted to continue normal operations ahead of the event. “It was impressive to watch multiple teams work so fluidly to execute in a confined space in a short period of time – all while working under the threat of rain,” said Aranha.

“The entire team at Albany Resort and Spectrum Light & Sound worked fantastically together to deliver a world-class product.” And to think that if the past is indeed prologue to the future, next year’s NYE blast should raise the bar even further.