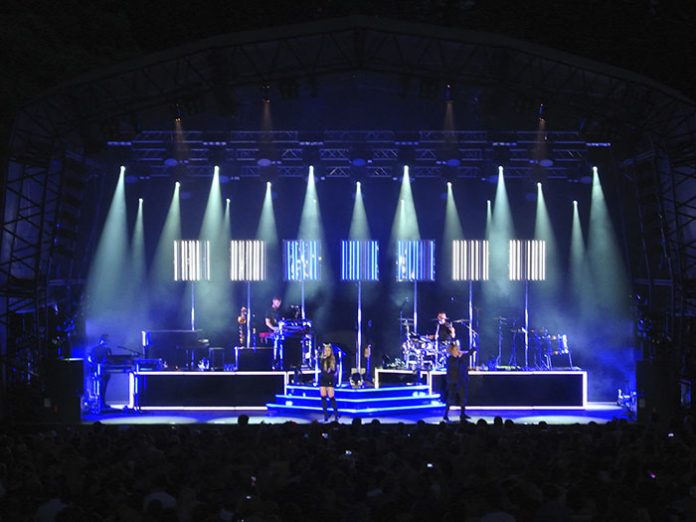 As Clean Bandit continue their touring progress towards a transatlantic sojourn in the USA in the fall, it seems an appropriate moment to consider the merits of Rob Sinclair’s production design. In particular, the unique constructions that inhabit the upstage area from left to right, manufactured by specialist show and event design house, Specialz Ltd.

These pods are four metres high with eight VDO Sceptron 10 fixtures in each pod. Each one is rigged on a stand that enables the pod to be rotated 360 degrees to be either facing downstage or at 45 degrees making them all but invisible to the audience.Sinclair elaborated on the basics:

“The idea was to have the mirrored pods located behind a black mirrored riser – lots of reflection – with neon edges. They needed to be able to turn so we could choose to see or obscure a video screen upstage. From that original concept we fired ideas back forth between Specialz, myself, our lighting designer, Liam Griffiths, and our rather excellent PM, Tec Beint. The choice for the Sceptron LEDs strips – we opted for the 10s with a flat diffuser – was simple; it needed to be something reliable, easily rentable, not too expensive and above all, effective.”

“Rob and Liam had a very clear idea of what they wanted to achieve,” said Specialz MD, Dave Smith. “We balanced the mirrored conceit with the more prosaic demands of weight and logistics by using laser cut mirrored acrylic to resemble a mirrorball, but much lighter. This was to be a festival package and had to move on and off stage quickly.  The towers were built offstage and then hoisted aloft; the Sceptrons were all prewired in their pods and the support tube also had integral cabling built into it so that once each unit was wheeled to stage and the castors locked down, mains and data were connected up through the base unit very quickly. Each pod was equipped with a DMX controlled motor driven base. Utilising a Specialz cable management system, they were capable of rotating 360 degrees in either direction before having to be reversed.”

“It is this combination of common sense and creative design that makes working with Dave such a pleasure,” added Sinclair. “From my end, I needed them to be programmable, individual and able to roll on and off in those tight festival changeovers. As for the rest of the sensible logistical stuff, I knew Dave would work that out for me.”

As with many uniquely designed fixtures, their deployment on tour reveals, not only their original potential, but more besides. Liam Griffiths is the man on the faders:

“The lighting design is completely designed around the rotating pods and risers. Side towers which consist of Solaris Flares and Martin MAC Axiom fixtures are off stage, the movers are purely located to the sides to hit the rotating pods and side washing the band. We also have a row of Solaris Flares upstage to make the risers really stand out. Both Rob and I have been surprised by what we’ve been able to do with them. The show starts with the pods rotated at 90 degrees so you can’t see them really and after the intro it drops into the song Stronger and the pods rotate out showing a nice beautiful Congo blue glow from the Sceptron bars – perfect introduction to our design. One look I really love is having the pods rotated at 45 degrees and having the reflection of the Sceptrons in the rear mirror, it’s very subtle.”

In all, Specialz built seven of the pods, within budget and delivered on time but that wasn’t quite enough for Sinclair: “We wanted a mirrored cello for Grace and needed to get it in a hurry to match the Glastonbury outfits. Dave got it to us in eight days; a day early and tuned into the bargain. It looks amazing and we’re going to be using it a lot on TV.”

“The light installations that Dave Smith and his team at Specialz have created for Clean Bandit are the culmination of clever design, courtesy of the ever inventive Rob Sinclair, coupled with Specialz outstanding workmanship, engineering finesse and attention to detail, not just on the finished items but also bearing in mind the need for future adaptability.” commented Beint.

“During the whole process from concept to delivery, it was always a pleasure to work with Dave, deadlines were tight and processes were tricky but there was never a moment when I felt that I wasn’t going to get a well-made product or be let down at the last minute, something that, as a production manager, you really need to rely on.”