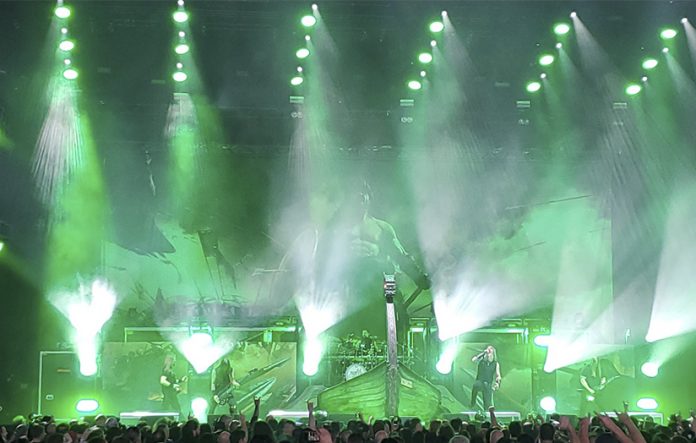 Swedish melodic death metal band Amon Amarth was one of three bands that opened up for Slayer this past spring on the metal rockers’ extended farewell tour. Martin Müller has been designing lighting and serving as lighting operator on Amon Amarth shows since 2016 and for the 16-date trek across the southern U.S. and east coast chose to reinforce the band’s melodic guitars and growling vocals using Elation Smarty Hybrid moving heads as contre-jour lighting effects.

With lyrical themes that deal with Norse mythology and history, the opportunity for interesting supporting visuals on Amon Amarth shows, such as a centre stage Viking ship, is great.

“Therefore I always use a reasonable amount of LED battens, hidden all over the stage. Moving light wise, I keep it to three types of fixtures (wash, beam, spot) even though lately I am going more and more the hybrid way, so actually going down to two types of fixtures. For the Slayer run, I used Smarty Hybrids as my main, floor-based, contre-jour hard edge.”

The designer mounted the punchy, 3° aperture Smarty Hybrids on up stage pipe to produce the backlighting technique, an aggressive look that reinforces the power behind a band like Amon Amarth. “I really liked the backlit, straight in the face, look with the prism and beam reducer,” he said, adding that the design approach looked especially good in powerful numbers like “Raise Your Horns” and “Guardians of Asgard.”

“I always send a request out their direction once I have to plan another tour. Gemini was, as usual, very supportive during the advancing and when I got the gear on the first day of the tour, it was well prepped and easy to understand and to set up.”

With DARTZ to be found on big-budget acts like Paul McCartney, Lady Gaga and Kelly Clarkson, as well as smaller setups for bands like Chon, Lamb of God and Amon Amarth, the powerful yet compact moving head are proving to be a useful luminaire in configurations both large and small.