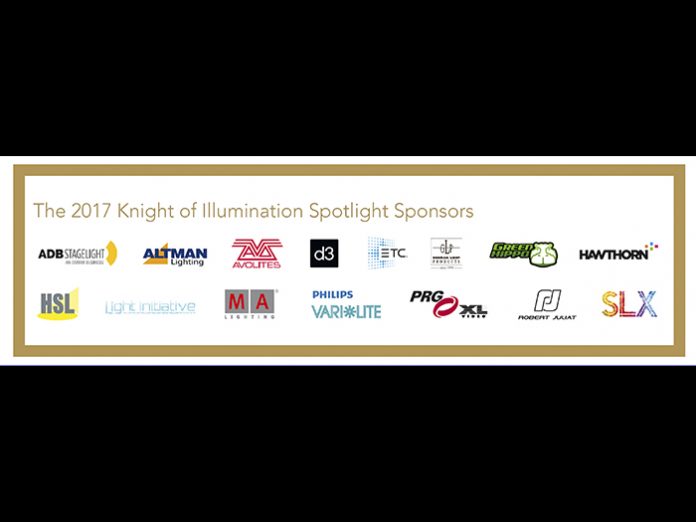 All Spotlight and Headline Sponsors have been confirmed for the 10th anniversary edition of The Knight of Illumination (KOI) prestigious Awards, which will be held at the famous Eventim Apollo in Hammersmith on 17th September.

One of the biggest nights in the Entertainment Technology industry celebrates the exceptional creative talents of international lighting and digital content designers working in the UK across the sectors of television, theatre and concert touring & events. Awards in each of these sectors are sponsored by individual industry organisations known as the Spotlight Sponsors.

Koy Neminathan, Sales Director for British lighting and video console manufacturer, Avolites, said: “We have attended every KOI Awards since the beginning and we enjoy meeting designers.The event has always offered us the opportunity to network with a large number of talented individuals and professional companies. We are excited to sponsor an award this year which ties in well with our newly focused vision. The team and I are looking forward to this year’s event, especially as it’s the 10th anniversary!”

Mark Ravenhill, President of lighting manufacturer GLP German Lighting Products also explained why GLP were keen to be a part of KOI this year: “We are honoured to be sponsoring at this year’s KOI Awards. The Awards offer all of us within the lighting community a unique opportunity to come together. We are very proud to be a part of a program that celebrates designers’ work, their passion and their achievements. Our work goes hand in hand with the lighting designers that use the fixtures in such creative and imaginative ways. What isn’t there to celebrate about that?”

Green Hippo’s Head of Sales and Marketing, James Roth also expressed the company’s excitement in returning to the awards as a Spotlight Sponsor this year: “We are delighted to sponsor the KOI Awards again and we look forward to recognising the genuine innovation and talent demonstrated this year in the Video Display for TV category.”

Thanks to the support of all the fabulous KOI sponsors the event has been able to evolve year on year to the international, pan-industry awards event that it is today. Key to that growth has been the support of Headline Sponsors OSRAM and Claypaky who will be supporting the event again this year.

On top of the fifteen awards across television, theatre, and concert touring & events, the Enrico Caironi Lifetime Recognition Award will also be presented to an individual who has continually gone above and beyond the call of duty throughout their career, benefitting colleagues and the industry.

The Knight of Illumination Awards was devised in 2008 by Claypaky alongside Lighting Designer Durham Marenghi and his wife Jennie Marenghi who still coordinate the Awards.

Shows performed or broadcast in the UK between 1st August 2016 and 30th June 2017 are eligible for entry. Following the same process as previous years, Theatre category nominations are submitted only by the KOI judging panel. Nomination submission can be made through the KOI website, but will close on 30th June.