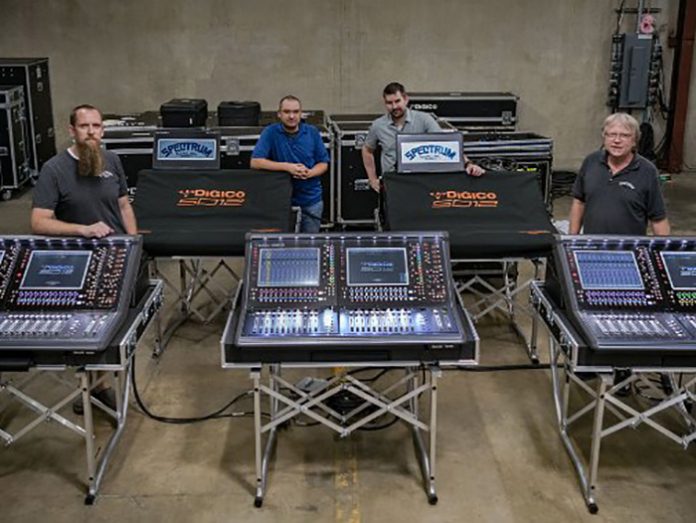 Since 1979, Nashville-based Spectrum Sound has been providing concert production and rental services to some of the biggest names in country, Christian, rock and beyond. Certainly one of the reasons for its success over the years has been the company’s firm commitment to providing what Founder Ken Porter calls “best-in-class equipment”—a collection that has once again expanded thanks to Spectrum’s recent addition of six new DiGiCo SD12 mixing consoles and four additional SD-Racks.

“The SD12 fits into our rental inventory very well,” said Live Sound Accounts Manager Bobby George, who has been with Spectrum for the past eight years. “We have a fair amount of touring clients that use DiGiCo and we feel that this console will be a natural fit for them as they move up from other DiGiCo platforms.

”  George notes that the SD12s have already been put into service on a number of festivals, tours and one-off events—including two large Harvest Christian Fellowship events with Greg Laurie at Anaheim’s Angel Stadium and University of Phoenix Stadium, which used four desks to run FOH and monitors on A and B stage setups for a variety of contemporary artists like David Crowder, Lecrae, Jeremy Camp, NEEDTOBREATHE, Phil Wickham, MercyMe and others. Each console was paired with its own SD-Rack, connected via fibre, and equipped with a full complement of Waves plugins.

“The first thing that every engineer has told us as they’ve walked up to the SD12 for the first time is that they really like the double screens compared to the SD10, SD9 and SD8, especially on a board this compact,” he said. “Many of them have also commented on the angle of the screens, saying that it improves visibility. The screens make setting up and operating the desk super-easy while providing fast access to the most important parameters for on-the-fly adjustments during the show. We’ve had a great success rate with them so far and all of the engineers have been very happy.”

“To me, the SD12 feels like the next logical step within the SD product line, and once you combine that with the new 32-bit mic pres, it’s a real winner,” George commented. “Add to that the exceptional service we’ve always received from Group One, DiGiCo’s US distributor, and it made perfect sense to add these new desks to our rental inventory.”