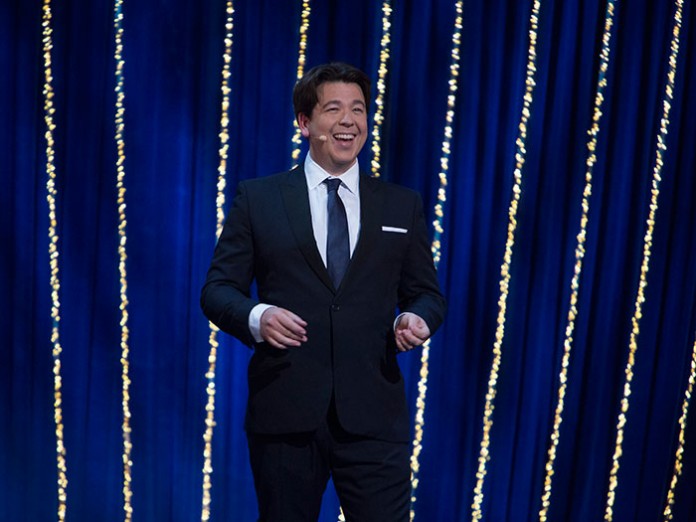 The show is hosted by Michael McIntyre and features a variety of acts and talent, the production was recorded in front of a live audience at the Theatre Royal, Drury Lane, London.

A six week run of filming began at the end of February and was completed in early April. Showforce provided a team of 22 who were on site for two nights each week, delivering crewing requirements for the theatre, the backstage area and to support the production’s suppliers. This included: loading in Plus4Audio’s equipment; transferring PRG’s lighting rigs to the stage; unloading and installing a video wall for Anna Valley and carrying Steeldeck up three flights of stairs for Steel Monkey. In addition, two teams were situated upstage, building cable truss bridges and another helped to unload and deliver catering equipment to the correct area. As each team finished it was all hands on deck to join the scenery team assisting with building the framework and hanging the drapes. Furthermore, each week two rows of seats had to be removed from the auditorium and a corridor installed, specifically for the show.

The theatre also had a run of Charlie and the Chocolate Factory playing at the same time. With two productions running side by side, storage and space was limited and manoeuvring kit backstage was a challenge. As always, timing and planning were crucial with only one way on and off the stage.

Every week the crew were presented with a different set of challenges as the acts and performances were so varied and required different levels of support. One example was a trapeze artist with aerial apparatus that required two tonnes of stage weights, which were secured in boxes to ensure the show delivered both a safe and entertaining act.

Adrian Pegg, Line Producer of Michael McIntyre’s Big Show, said: “I have used Showforce for all the Michael McIntyre theatre based TV shows produced by Hungry Bear Media, both at the London Coliseum and now at the Theatre Royal Drury Lane. With a severely restricted schedule every minute counted. We had just 24 hours to get in everything overnight, then have a full rehearsal, record the show that evening, and then turn everything around ready for another performance of ‘Charlie and the Chocolate Factory’ the next day. Showforce provided a consistently excellent service with highly proficient crews, and we will definitely be coming back for our next series in the summer.”

Chris Martelly Operations Director of Showforce, said: “Fast turnarounds with limited space and time are always one of our biggest challenges. The Showforce crew with their experience and dedication have yet again met a variety of challenges, responded to them and helped to deliver an entertaining and professional production.”