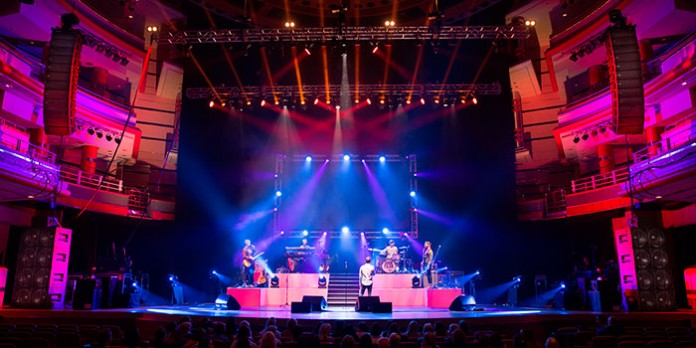 In the wake of his successful Right Here album released in the Autumn, former Westlife star Shane Filan and his band embarked on a successful theatre tour, with a set list that mixed old Westlife favourites with new material.

It also reunited husband and wife sound engineering team of Chris Pyne (FOH) and Becky Pell (monitors), metaphorically linked by 100 metres of cable, the former mixing the house sound on a Martin Audio MLA Compact System 36. The two had previously worked together with Kylie Minogue, Anastasia, Il Divo and the original Westlife before Pyne took up his position at Martin Audio as Asia Pacific Product Support Engineer.

In the meantime he had picked up the mantle with some of Filan’s solo dates in South East Asia, while his wife has continued to work with the artist for the past six years. But as a representative for Martin Audio’s flagship PA it has not only given Pyne the chance to expose it to other engineers, and demonstrate the magic of the multicellular control to system tech Andy Greenwood, but also beta test the new version of Martin Audio’s Display predictive software. While Greenwood was extolling the speed with which he was able to familiarise himself with the optimisations, Pyne was able to give a new beta version of Display a thorough run-through. “This version is being tested in the field prior to a general release in the next couple of months, and there have been substantial upgrades,” he explained. “The system data has been reassessed for even greater accuracy while the internal tonal balance has been enhanced, so in my opinion it’s shaping up to be the definitive article. It also introduces Express Mode which should halve the time necessary to do the system calculations and process the system presets.“

For this theatre tour of mostly 1500-2000 seat venues, production scaled the rig accordingly but generally run 12 MLA Compact elements per side, either flown in the larger venues or stacked, along with four DSX subs on either side. “The MLA Compact is a versatile system for this size of tour,” he continued. “We measure each venue, put the data into the software to calculate the angles and output of the system, and time align it; the whole thing is up and running inside an hour and a half.”

The speed, versatility and adaptability of MLA has never been better demonstrated than at St. David’s Hall Cardiff, where the sudden cancellation of a nearby Wet Wet Wet concert resulted in a lot of unexpected walk-up sales. “We suddenly had to open up new areas of the venue to accommodate the extra footfall,” reports production manager Rupert Doogan-Hobbs. There was certainly no need for a de-rig and physical system reconfiguration. “From a time management point of view it was fantastic. We could simply reconfigure the venue parameters electronically in the system.”