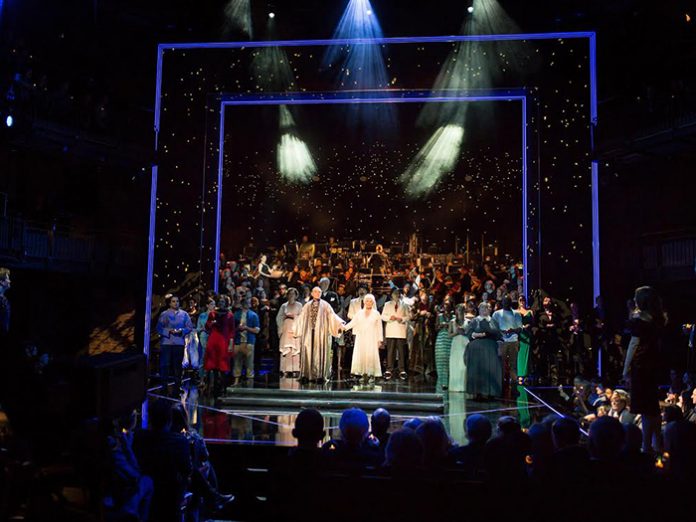 On 23 April 2016 the world celebrated the life and work of William Shakespeare, on the 400th anniversary of his death. The commemorative events included Shakespeare Live! From the RSC – a live production including music, drama and comedy, which took place at the Royal Shakespeare Theatre in Stratford-upon-Avon.

Hosted by David Tennant and Catherine Tate who, as well as appearing together in Doctor Who, shared the lead roles in a West End production of Much Ado About Nothing. Shakespeare Live! was also broadcast live on BBC2 in the UK, and was recorded for later screenings on TV and in cinemas worldwide.

The GroundControl system allows a specially customised PRG Bad Boy spotlight to be rigged and flown above the audience, whilst the control unit is situated on the ground. The light fixture includes a camera, and the control unit includes a live feed from the camera, enabling the operator to have local control of lighting intensity, iris, zoom and edge.

Peter Marshall, Account Director for PRG XL Video, was contacted by Lighting Designers Herbert and Catmur to discuss the best options for adding followspots for this one-off event, and Marshall recommended the innovative GroundControl system. Marshall commented: “We were pleased to be able to contribute to this special event, and to demonstrate the difference that the GroundControl Remote Followspot can make in a theatre environment. We gave Vince, Nigel and David a demonstration at our warehouse in Longbridge, and they were sold on the concept.”

PM Tanqueray explained: “The Royal Shakespeare Theatre does not usually have a requirement for roving high brightness followspots, but the nature of this unique production, including lighting it for television broadcast, meant that we needed to bring in spotlights, as they were a vital part of the show design.

“We do not have traditional followspot positions in the auditorium, so this new GroundControl technology, enabled us to include bright spotlights in the production without having any seat-kill. It really helped us achieve the result we wanted without adversely affecting the production.”

Catmur agreed: “The GroundControl Followspot is a genius concept. We couldn’t have done the show without them.” Production Designer, Rob Jones, whose credits include the RSC’s Hamlet with David Tennant, and The Vote at the Donmar Warehouse, both of which were filmed and broadcast on television, created a versatile layered environment for the performers.

With the orchestra located upstage, during several performances it was masked by a flown LED screen, formed from PRG XL’s ROE MC-7 high resolution blackface LED. The screen was raised and lowered as required, being used for segments including comedy from the Horrible Histories team; and scenes from Shakespeare’s As You Like It, and Antony and Cleopatra. The LED screen was also occasionally masked by a semi-transparent drape which created an extra layer of depth to the production. Slightly downstage, Rob Jones’ design included a proscenium arch, which was also populated with the MC-7 LED both to the front face, and with an angled reveal on both sides and across the underside of the arch beam.

Video Designer, Alex Uragallo explained: “With the 3D planes of the arch, one the hardest things was mapping the video content across the LED panels. It took some extra consideration to make sure the content flowed seamlessly, wherever the camera moved. “The arch worked really well, seemingly having the content move with the performers, and was clearly visible from multiple camera angles.

He continued: “I was surprised at how black the LED screen face is when off, and this created an almost glossy surface which matched well with the black formica floor. For the scenes where the moon was displayed on the rear LED screen, I was particularly pleased with the quality and subtlety of the moon reflection. The LED was a great way of achieving this effect without having a massive light source, and I would definitely consider using this again in other productions.”

Oliver Luff, Senior Account Manager at PRG XL Video, commented: “We were delighted to help the Royal Shakespeare Company with this very special celebration event. Our MC-7 LED is a versatile product, and the combination of live theatre performance and television broadcast showed that it is ideal for many different uses. Alex Uragallo’s content looked fantastic, and we were happy to contribute to making this historic occasion a success.”