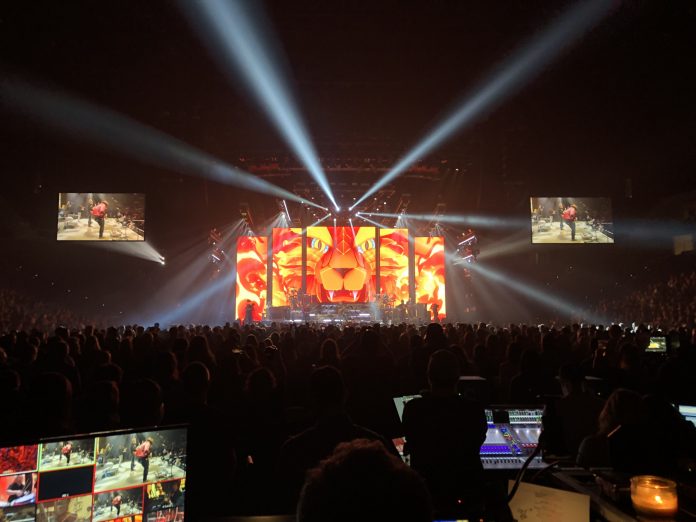 Zac Brown Band has commenced the second leg of its Down the Rabbit Hole Live tour, the group’s fifth headlining concert tour, in support of its fifth studio album, Welcome Home.

Down the Rabbit Hole Live launched last summer; the new 15-date leg kicked off March 1 in Tulsa, Oklahoma and wraps in Peoria on 27 April 2018. Zac Brown Band won’t be idle for long – the just announced “Owl Tour” begins in Indianapolis at the end of May and will play 36 dates in North America through October.

SES is the lighting vendor for the band; its sister company Special Event Transportation (SET) serves as the trucking company.

“We’ve worked with Zac Brown Band for the last 10 years, including the first leg of Down the Rabbit Hole,’” said Jeff Cranfill, Co-founder and Vice President of SES. “The design team has redesigned the rig for 2019 with Down the Rabbit Hole merging into the ‘Owl Tour.’”

Bruce Rodgers is the Production Designer for Zac Brown Band, Chris Cockrill the Lighting Designer and Diego Pernia the Creative Director. Rodgers’s new set for the tour features “Moving LED walls and trusses that create a variety of scenic changes throughout the show,” Cranfill explained.

SES has added 53 Claypaky Scenius Unico fixtures to the new rig. “Chris [Cockrill] asked me for some options; he wanted to move away from the standard spots we’ve used for the past few years,” said Cranfill. “We had already done a number of tours with Unicos: Ed Sheeran’s current tour (partnered with LCR from the UK), the 2018 Rod Stewart tour, the 2018 Niall Horan tour and the current Luke Combs tour.  We had also done some TV ministry events where I was the lighting designer and needed a framing spot that was TV-friendly, and I fell in love with the light.  I told Chris that I felt the Unico was the best choice for the tour, and he agreed. So Unico is now the spot for the rig.”

SES invested heavily Unicos, and Cranfill has been “very impressed” by the fixture. “It’s a big, bright light that performs incredibly well: the optics, beam and colour mixing are so smooth and manageable.  With one light I can do everything from very saturated beamy rock ’n roll looks to lighting people with a camera-friendly, softer light.  I love the animation wheel with the asymmetrical patterns, and when you combine it with gobos you still net a good amount of output.  I really benefit from the framing shutters and diffusion filters as well.   The diffusion is very smooth with great output and the framing shutters are very accurate and easy to adjust.  Unico is a great choice as an all-around fixture for our needs.”

SES also added 36 Claypaky Mythos 2 and 16 Sharpy fixtures to the Zac Brown rig for beam effects and dynamic looks.  Controlling the lights on the tour are grandMA2 full-size and grandMA2 lite consoles plus a pair of grandMA2 onPCs with Command Wings.

To create haze and fog for the show SES is providing MDG ATMOSPHERE haze generators and ATMe foggers.