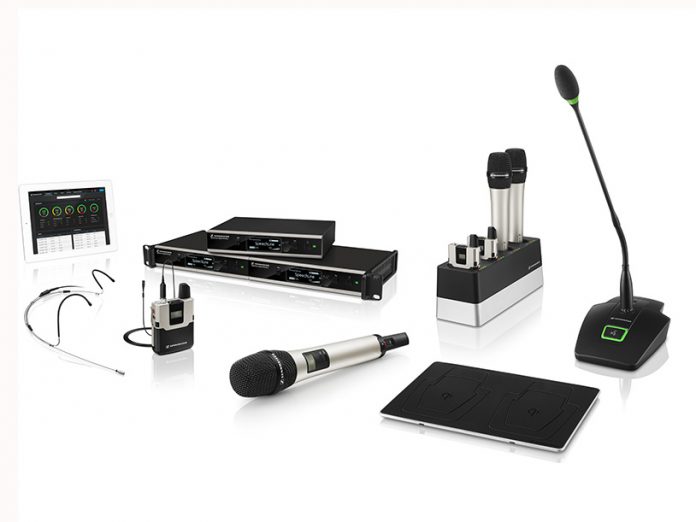 “SpeechLine Digital Wireless was created by Sennheiser to be the first solution to meet the demand for a wireless microphones dedicated purely to speech. It offers easy installation and operation, a high level of reliability and future-proof technology to deliver supreme speech clarity,” said Kai Tossing, Portfolio Manager, Business Communication.

The SL Tablestand 153-S DW is the perfect solution for ad hoc press conferences or podium discussions in any location. It is compatible with Sennheiser’s MEG 14‑40‑L II B gooseneck microphone, connecting via its XLR-5 socket. The unit provides battery life indication via dedicated battery status LEDs.

Offering compatibility with all Sennheiser XLR-3 gooseneck microphones, the SL DW Wireless Tablestand 133-S DW is optimised for podium discussions, speeches and lectures. It comes with a rechargeable battery pack with up to 10 hours of operating time.

Both new Tablestands can either be charged wirelessly with Sennheiser new CHG QI 2 wireless charging base or via USB. They can also be monitored and controlled with Sennheiser’s Control Cockpit.

Also added to the SpeechLine Digital Wireless family is the CHG 4N, a network enabled charger featuring four individual charging bays. These can either be used for the SL Bodypack DW or the SL Handheld DW. Each bay has four dedicated LEDs to indicate the corresponding battery status of the mobile device.

Its flexible network interface provides IPv4 and IPv6 compatibility for seamless integration. As with the new Tablestands, Sennheiser Control Cockpit makes it easy to remotely monitor and control the CHG 4N’s settings and status information.