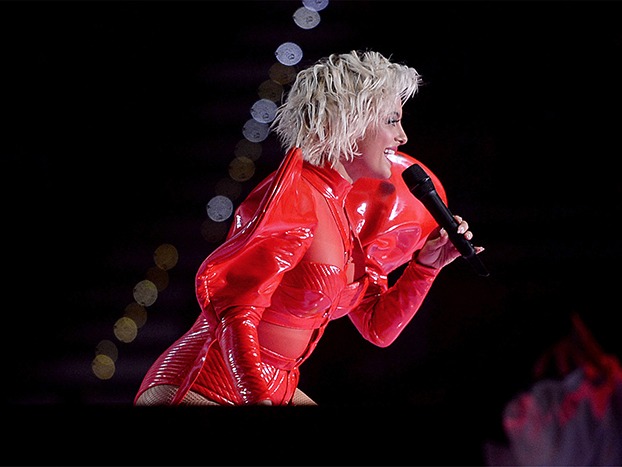 This year’s MTV EMA Awards was held at Bilbao’s Bizkaia Arena and hosted by American actress and singer Hailee Steinfeld.  For the past two decades, Sennheiser has provided unwavering support to its audio supplier Britannia Row Productions and their partnership delivered perfect results.

“The show included 11 acts, including three bands and three multi artist collaborations,” said Colin Pink who lead the audio team. “The presenters and winners all used Sennheiser Digital 9000 Series handhelds, chosen for their great clarity and extraordinary lack of handling noise. As for the music, the line-up this year was very radio heavy and Sennheiser’s Kevin Jungk provided our RF team with excellent technical support.”

“I have been a huge fan of Sennheiser wireless since I was first introduced to the SKM 5200 about five years ago,” said Brandon R. Blackwell, Front of House engineer for Nicki Minaj. “Since then, it has become my preferred mic choice for any artist I have mixed FOH or monitors for. I loved the sound so much that when the Digital 6000 series came out, I had to have it. I paired the new transmitter with the 9235 capsule and just fell in love again. I find that with this capsule, I get super clean and clear high end that just cuts through my mix.

“Also, the off-axis rejection is simply amazing. Dealing with feedback from either the PA, sidefills or wedges has been super easy to deal with, even with those artists that don’t have much output level. I have to say that I have been happy to be a Sennheiser user and will continue to push any artist I mix to use them.”

Jimmy Nicholson was audio crew chief for Britannia Row, in charge of logistics from the mundane, such as wrangling local crew and plant machinery for the load-out, to working out creative solutions for the constant stream of curveballs that these types of shows throw at the audio crew.

“We used the 9000 series on all the presenters and award winners, and the 6000 series on several artist mics,” he explained. “The capacity of the systems to successfully operate densely packed coordinated channels in a small area of the RF spectrum freed up space for us to operate the large number of IEM and conventional analogue receiver channels that were also in use on the show.

“Due to the design of the stage [in the shape of an X, which effectively split it into five stages, one in the centre and four at the end points of the X]and the large backstage area split across two main entrances at both the conventional position for stage left and stage right, we had a very large area requiring antenna coverage. We used a Sennheiser ACA-2 combiner to provide a distributed receive antenna system, with three zones – two covering the entire width of the arena and a third that covered the entire backstage area where engineers and artists were performing backstage line checks outside of where a traditional antenna setup would have provided coverage.”

In order to provide IEM system coverage across the entire length and width of the arena, the IEM antennas were flown on a truss upstage centre of the stage area.

“Everything went incredibly smoothly and was very relaxed with no challenges other than that the stage configuration,” said Jungk. “The challenge here was to find good positions for the receiving antennas, which were hidden at the camera positions, ensuring they were not in shot for any camera, with the in-ear antennas mounted underneath the ceiling, also making them invisible to the cameras.”

“Also, a couple of US artists brought their own ‘L Range’ mics,” added Pink. “One of the advantages of the custom-made EM 3732 N Range receivers we were using is that they overlap with the US L Range, allowing us to easily integrate these with our system.”

“We are incredibly proud to have been able to support Britannia Row for so many years at this prestigious music industry event,” said Pierre Morant, Artist Relations, Professional Audio Division at Sennheiser. “Their crew was extremely professional, delivered perfect audio and, whilst Kevin was there to provide support for them, they also gave him outstanding support.”

This feeling of mutual respect and gratitude is echoed by Pink, who concluded: “The show itself was a great success and there were absolutely no audio problems. This was due in no small part to Sennheiser’s contribution.”