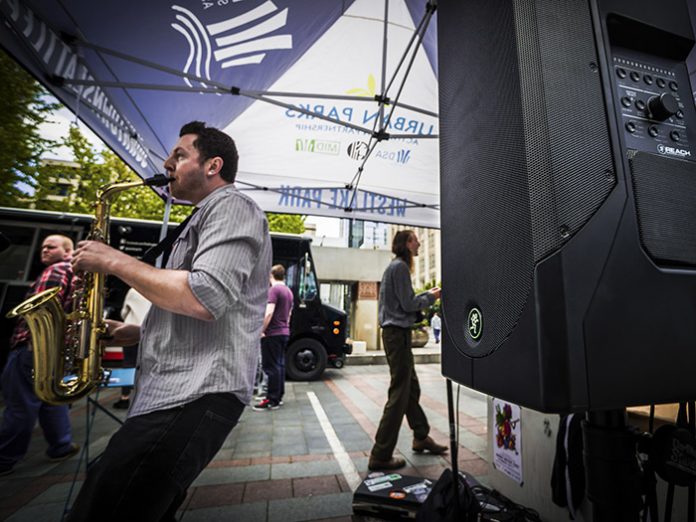 Make Music Day began in France in 1982, when the Ministry of Culture created the Fête de la Musique. A kind of musical holiday, the Fête is held annually on the Summer Solstice and features free, live music virtually everywhere, from street corners and parks to rooftops and gardens. The celebration has since caught on in more than 120 countries, arriving in New York City in 2007 and quickly spreading to other U.S. cities. The NAMM Foundation sponsors the celebrations in the U.S.

“Anything that gets music more exposure, we’re all for, and we wanted to support Make Music Day,” said Matt Blair, Director of Client Services at American Music, who provided the Mackie FreePlay and Reach PA systems. “Some performance locations have no power, so [Make Music Seattle Board President] Ed Beeson was especially interested in battery-powered sound systems, of which there are very few. We had done a FreePlay competition at our store, though, and I knew that the battery-powerable FreePlay would be the perfect solution.”

Already looking towards next year’s event, Beeson said: “I’ve already been talking to a lot of people in the Seattle music community, including all of the big players, like the symphony. Next year we want to get more of those people involved. Make Music New York is our model, and they’re a great place to go for ideas.”