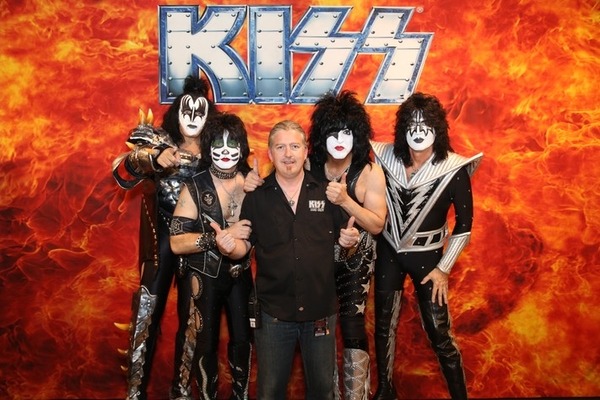 When did you first get involved with KISS?

“I was the Crew Chief in Australia on a few tours for Bytecraft when got to know the KISS family. Then, in 2007 Paul Stanley [lead singer] came to Australia for a solo tour and I was asked to light it. They were happy with the result and asked if I could fill in on a few shows as their LD Byran Hartley was busy. Finally in 2008 they came back to Australia and I was Crew Chief again. They asked if I would chief the Euopean Alive 35 Tour. I did and they extended their tour so I took over as LD for last few weeks as Byran had other commitments. In 2009 Bryan was not available so I took over and have been here ever since! Before all this I was a KISS fan from back in the late ‘70s so I have always known what a KISS show looks like. It was the first big rock show I had ever seen when they came to Australia in 1980s.”

KISS’ history in large scale rock ‘n’ roll is well documented. What is your personal approach designing a new tour?

“I try to make it look like the shows that made them famous in the ‘70s and ‘80s and there are certain cues that have remained through the decades such as Gene spitting blood! When each tour comes around my approach is to start where I left off, but as the design changes, the looks of the show change slightly as well. If you look at the 2009 show versus the 2017 one the lighting looks are quite different, but if you went year-by-year you would see the progression. I touch up something each day so the show is always evolving. If a song gets a new piece of video content I will change it quite a bit, especially the colours, to match the content.”

What were some of the design goals?

“We wanted to come up with something that looked big and really cool! First we had to draw in the centre grid that could hold several winches for the various fly gags we have throughout the show. There are a total of 6 for the band pods that fly the band at the start of the show along with 4 for the drum riser and 4 for Gene’s platform where he flies up to spit blood during a bass solo. Once that is all laid out I can start filling in with lights and video. The band asked for video in the air like they had at a Vegas residency. But we wanted to keep it fresh so we mixed it up a bit and worked out a different way to do it with a bunch of small screens with similar dimensions to the old KISS sign. A bit of a throwback to some of the classic designs. The whole design was a collaboration between myself and Robert Long, our Production Manager / Designer.”

What fixtures have you specified for your design to create the key looks?

“This run our supplier was Christie Lites UK. They have been our North American supplier for the past 4 years and for this European run virtually all the kit they gave us was straight out of box, meaning everything was top notch. The main workhorse on the rig was the Martin by Harman MAC III AirFX. We wanted a bright wash fixture and it’s the brightest Christie has in stock. We also have several Claypaky Sharpys which I use to recreate an ACL look. There is also quite a lot of LED PARs in 3 pods to basically salute the PARcans of yesteryear. We also use Elation Professional ACL bars to line the set and vertical towers, plus a scattering of Martin by Harman Atomic 3000 strobes.”

What were some of your standout moments from the last European tour?

“God Of Thunder was one of my personal highlights. It’s one of the darkest and moody songs in the set. During the song we have Gene flying up and playing on the lighting rig. I also really enjoy I Love It Loud as the video content just jumped out at the audience. During the song we have Paul Stanley flying to FOH and, once he is in the middle of the room, we light up the whole audience with a rig above him.”

‘The demand is there, and we are ready for any challenge’ – Solotech’s new UK MD, Bryce Jewell