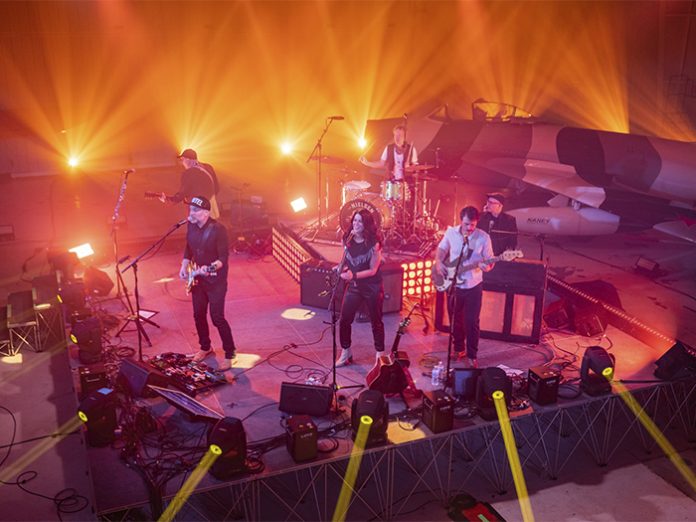 The Neilson Trust, is made up of Rick Nielson, an original member of Cheap Trick, along with his sons Drax Nielson (who also played with the group), and Miles Nielson, as well as Miles’ wife Kelly Stewart.

“This was an internal weeklong conference for a corporate client that was entirely livestreamed this year,” said Denny. “The concert took place on a Wednesday evening and was put on as a benefit show for a nonprofit, livestreamed for attendees to view.

“The basis of our design was a diamond stage, and equally sized diamond truss hang above,” continued Denny. “As most of the setlist was Cheap Trick songs, we wanted to pay homage to lighting designs of the past, while modernizing them. Our goal was to create a design that was interesting and exciting over the course of an hour-plus livestream.”

It was important to Denny that the show have a unified look for each song, with limited changes throughout to allow the livestream camerawork to flow seamlessly. However, he also wanted the design to look completely different for each song. As a result, most songs were lit with only half his rig at any given time.

Helping Denny achieve this vision were 12 Rogue R2 Wash fixtures as well as 16 Nexus Aw 7×7 and eight Nexus 4×4 units. The Rogues were arranged evenly along the perimeter of the stage, with six fixtures providing mood-setting backlighting of the band members and six used for side lighting.

“We had the Rogues on for virtually every song,” said Denny. “They were the backbone of our design. Changing the color washes was essential to creating different looks so the show was varied and interesting in a way that came off very easily on camera.”

While the Nexus 4×4 panels were used to outline the drum riser and wash the stage, the Nexus Aw 7×7 delivered narrow beams of intense warm white light downward from the overhead truss grid.

“The 7×7 fixtures were big eye candy effects,” said Denny. “We rolled them out for big moments. As I mentioned, we wanted to pay homage to the lighting designs of past Cheap Trick shows, while also modernizing them. This was my main reason for using the 7×7 panels. My vision of them was to create a modern day version of a par/ACL look. The warm white coloring matched that of the older pars, and the tight beam again brought me back to those classic rock shows.

“My favorite look during the livestream was when Garrett used the 7x7s to create this amazing bump effect, where the hit throws the Nexus at full, but then the pixels all fade out at different times,” continued Denny. “This created an this almost twinkle effect, which was amazing.”

Outside-the-box lighting moves like this one are reminiscent of a philosophy espoused by Rick Nielsen himself, who once famously declared: “Playing it safe isn’t fun. You have to take a chance.”