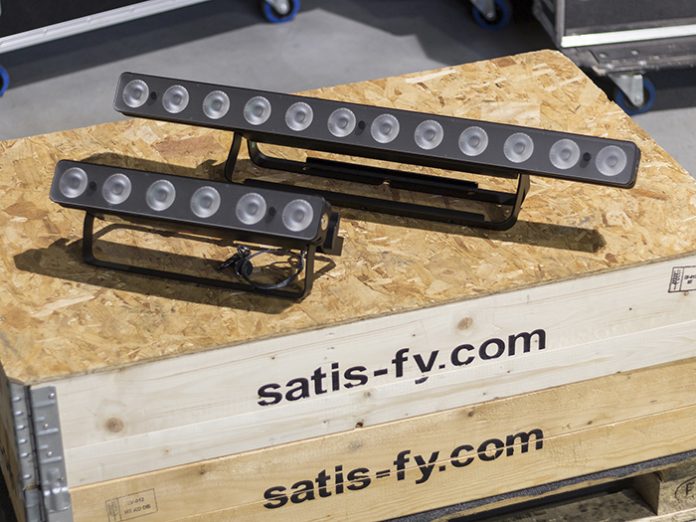 Full-service German event and media production company satis&fy has added to their inventory of Elation Professional lighting gear with a recent purchase of SixBar 1000 and SixBar 500 LED battens.

Elation’s SixBar Series of colour-changing battens feature a six-color LED multi-chip and can be used for a variety of purposes such as general purpose wash/strip lighting, uplighting, cyc wash, accent lighting or as a pixel strip.

“We were looking for a successor to cover a wide range of services, one of them a versatile and homogeneous illumination of any surface and we found it in the SixBar,” stated Martin Heuser, Global Director Lighting and Rigging Services at Satis&fy, based in Karben, Germany. “One of its most convincing features is the 12W six in one LEDs with RGBAW and UV. Another benefit is that it can also be used as an effect light. The whole construction itself, and features such as the included glare shield on delivery, were also appealing. Even the flicker-free operation and low power consumption compared to light output convinced us that it was the right choice.”

The SixBar’s high-power single-lens RGBWA+UV LEDs offer an expanded palette of colors, including ambers, true whites and even an ultraviolet effect. Available in two versions – the SixBar 500 (450mm) with six 12W LEDs and the SixBar 1000 (900mm) with 12, 12W LEDs – both luminaires spread light at 30° beam angles and feature individual LED control for greater design possibilities. Both the SixBar 500 and SixBar 1000 are capable of smooth dimming from 0-100% and include a selection of variable dimming curves for faster programming. A selection of built in colour macros, colour fades, strobe and chase effects add to their versatility. Both units feature Art-Net and Kling-Net protocol support for easy control, especially in pixel mapping applications. Included with both units is a removable glare shield and diffusion filter that is ideal when using as a wall wash unit.

Because of the versatility of the product, Martin Heuser said that Satis&ampfy will use the SixBars for corporate events as well as live entertainment. The new fixtures join a recent purchase by Satis&fy of Elation’s multi-functional Platinum FLX hybrid moving head and EMOTION moving head digital light.

Robe Gets into more panto madness