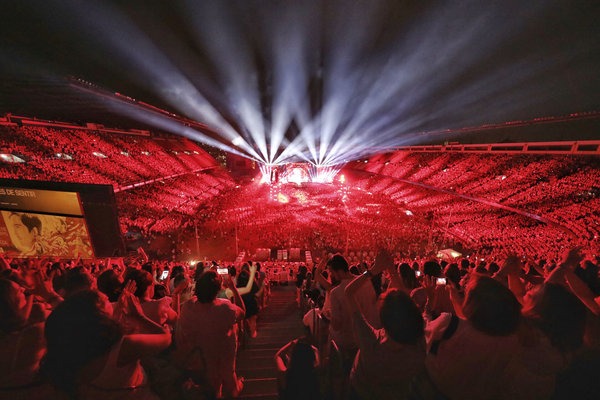 The show’s Production Manager Borja Gonzales, contacted stage automation and engineering specialist, WIcreations. Geert Stockmans headed its team after the introduction, which initially came six months ahead of the gig via Frank Janssens, a Belgian lighting specialist living and working in Spain. Stockmans and Janssens have worked together many times, including on Malu’s 2016 tour.

WI supplied a total of 52m of curved tracking system, including the truss to which it was rigged, plus the 16 automated trolley carts to which the columns of LED / moving lights were attached, each fitted with a WI rotating element. Each LED / moving light column weighed 1,100kg.

“The challenges – and the rewards – of this project were numerous,” stated Stockmans.

Six track trolleys for the LED columns and the 5 tonne central lighting pod – without adding on a single item of lighting or video kit – they were already pushing 30 tonnes of dynamic weight loading, and nearing the capacities of the roof system installed in the stadium.

Assisted by PRG’s Belgian office, Pablo Alboran and WI co-ordinated a scaled test build of the system in Antwerp’s Sportpaleis three weeks ahead of the gig to demonstrate to the key Spanish production personnel exactly what would be delivered. It was also a chance for any major queries to be answered, and it put overall weight awareness at the centre of everyone’s attention, and underlined its importance to the success of the concept.

“It was really satisfying becoming a small part of the creative team rather than ‘just’ a supplier, mainly thanks to Borja that everyone was given this time. He kept everyone involved on rack and moving forwards, even through the concert seemed ages in the future,” added Stockmans.

The landmark two and a half hour performance saw Sanz engage in a number of unique collaborations with Laura Pausini, Juan Luis Guerra Juanes, Pablo Alboran, Niña Pastori, Malu and Bisbal, among many more global musicians.