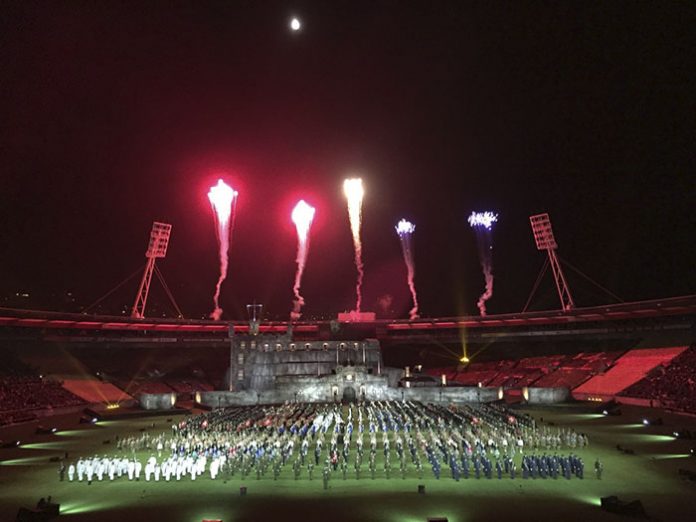 A total of 60 channels of Shure UHF-R — the largest number of wireless mics ever used on a military display like this — were used in shows in Australia (where technical services and equipment were supplied by a 12-strong team from audio facilities company Norwest) and New Zealand (where UK company Wigwam Acoustics and Wellington’s Western Audio Engineering were jointly responsible behind the scenes).

Providing sound reinforcement for the soloists, marching bands and singers playing during the Tattoo so that the musicians could hear themselves and the live audience can hear the performances (and so the latter can be broadcast) was already demanding at Edinburgh Castle, where the maximum distance between performers is about 40 metres, and the total live audience is around 9000. At the stadiums in Australia and New Zealand, the performers were even more distantly spaced (around 120 metres at maximum) and the total audience was much larger (40,000 at the Etihad Stadium in Melbourne and 25,000 at the Westpac in Wellington). Furthermore, as part of a marching or dancing display, the performers were constantly in movement, precluding any kind of solution involving wired microphones or fixed-position foldback monitoring. Balancing the available budget with the ideal requirement for as many wireless mics and in-ears as possible also required careful planning. Sound Designer, Sebastian Frost, summed up the difficulties: “Even 350 bagpipers and another few hundred musicians sound remarkably remote in such a large space, and consequently everything that takes place needs careful audio reinforcement. It’s also critical that the various sources within the stadium stay fully time-aligned and coherent. This might be a marching band of 50 musicians, playing with a rock rhythm section positioned 100 metres away on the South castle ramparts, and a 40-strong choir a similar distance away on the North castle ramparts. Keeping all these performers playing or singing in time together is the unique challenge.”

As if this weren’t enough, the available RF spectrum at the Antipodean Tattoos was also much more restricted than has been the case in Edinburgh in the past, providing a further curb on the use of RF mics and foldback systems for the musicians. Sebastian Frost continued: “One of the most complicated aspects is creating the microphone plot to make the most efficient use of the available channels of RF.” At Wellington, Katie Worsick from Wigwam Acoustics described her biggest challenge on the project: “To cram 66 channels of RF into very little spectrum!” She used Shure’s Wireless Workbench to create her frequency plan not just for the Shure UHF-R systems, but for all of the other RF equipment too, taking advantage of the Wireless Workbench software’s compatibility with systems from multiple manufacturers.

In Wellington, the Tattoo eventually made use of 30 UR4D wireless receivers, 60 UR1, UR1M and UR2 bodypacks, and four UA845 antenna distribution systems. The system used in Melbourne added a further channel of UHF-R wireless microphones, plus six channels of Shure PSM1000 for the in-ear monitoring — a total of 83 transmitters and receivers, taking the microphones and IEMs together. According to Sebastian Frost, this was the largest number of radio microphones ever used on a Tattoo. Frost continued: “What is certainly a record is the 944 ‘pack-swaps’ performed by the deck team during every performance. This involves placing a microphone or IEM on a performer in a particular configuration before each act, and collecting and refitting to another performer for the next. The use of several buggies driving around the service road of the stadium was the only way the microphones could be collected and refitted in time.”

Despite the challenges, both Tattoos passed off without unwanted incidents. “The Shure systems worked amazingly, both for the live audiences and for broadcast,” confirms Sebastian Frost. “It was something of a miracle, particularly in Wellington, where on top of everything else they were contending with, they had one-hundred-kilometre-an-hour winds as well!”