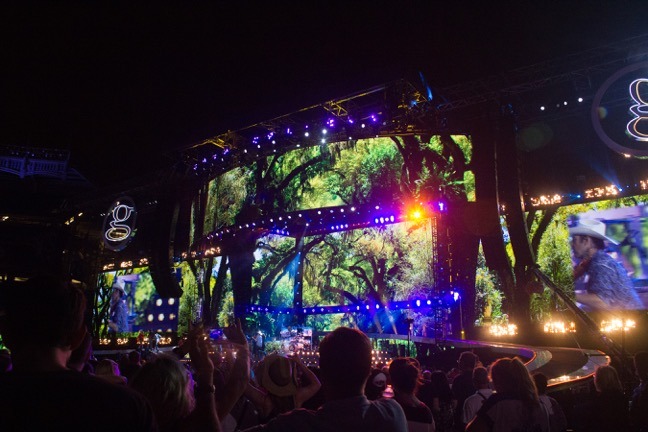 Keeping pace with Garth Brooks’ concert at the Yankee Stadium was a high octane light show created by Robert Peterson of Real World Lighting with a stage rig supplied by Bandit Lites that included Rogue RH1 Hybrids from CHAUVET Professional.
Peterson used 54 of the 330W beam / spot Rogue fixtures, linking them via DMX into fibre NPUs. He positioned some of the hybrid fixtures in the 60ft long horizontal gaps in the main stage screen array, and flew others on the top of the 100ft wing screens. The tight beam angles and wide zoom range of the Rogue RH1s made them well-suited for this application.
“I positioned Rogues where I did to take advantage of their beam graphic capability in many highly featured areas,” he said. “The high intensity and availability of a wider beam angle made these hybrids very effective during key moments of the concert.”
The Rogue RH1 Hybrid was recommended to Peterson, who has been involved in most of Garth Brooks’ high-profile TV projects since 1992, by Michael Golden at Bandit Lites. “Michael introduced me to these fixtures, and it was certainly a good recommendation on his part,” said the LD. “We had a lot of high-output moving fixtures, strobes and Nexus 4 x 4 panels in our rig, and the Rogues cut through competitive layering and ambiance without a problem.”
In keeping with their magnitude and scope, the Garth Brooks Yankee Stadium concerts had a massive array of 4K screens and a 27 camera 4K video complement. This made integration and team planning absolutely essential.
“We spent a lot of time in previs and full scale preproduction,” said Peterson. “The entire team deserves a great deal of credit for making this work so well.  This includes David Butzler, GB Lighting Designer and Lighting Director Follow spots; Monica Rose, Lighting Director and Project Manager; David Hunkins Gaffer; Kevin Lawson, Lighting Director Stage and Performance; Tyler Roach, Lighting Director Audience and Architecture; Troy Fujimura, Lighting Director Screens; Chase Simmonds, Screens Producer; Best Boys Buddy Lunn, Tim Brown, Cole Kiracofe and Jeff Anderson; Fran Ninivaggi of Yankee Stadium. Finally the fantastic crews from Bandit, Upstaging, VER, PRG and IA Local 1 and IBEW Local 3.”
Although Yankee Stadium is an awe inspiring structure, the massive production proved manageable for Peterson and his team. “Garth made sure we had the time and resources to handle the challenge, and we are all tremendously proud of the result.”
www.chauvetprofessional.com