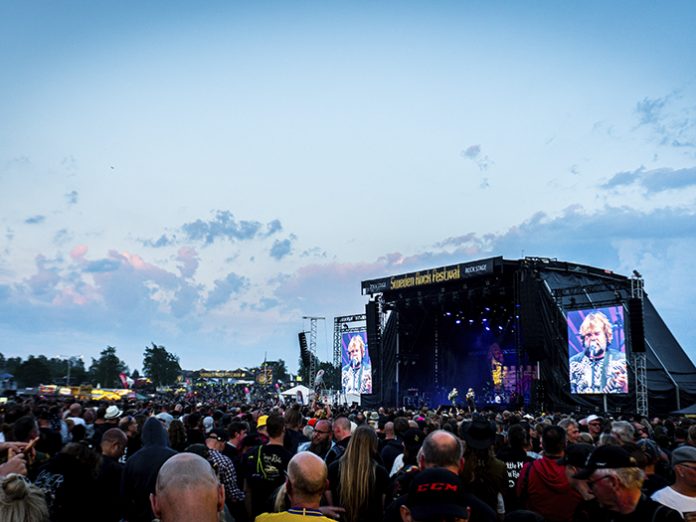 This year’s Sweden Rock Festival in Sölvesborg saw crowds of 35,000 rocking out to huge names including KISS, Ritchie Blackmore’s Rainbow and Def Leppard.

“We had discussed a central production hub, however, the scale and distances between stages, combined with the packed lineups meant that two independent systems provided a more practical solution,” explains Ulric Flood, Cloud Production.

Adding: “The headliners also had their own guest directors, so it was important they were near to the artist’s stage to make any last-minute adjustments.”

For acquisition, each of the main stages had its own multicam set up; the ‘Festival’ stage was handled by four Ursa Broadcast, while three Ursa Mini Pro shot the ‘Rock’ stage. Both stages also had a pair of Micro Studio Camera 4K on stage for close up angles of the bands.

“An effective festival IMAG needs a good quality 1080p25 program feed that incorporates lots of shots of the crowd enjoying the performances, as well as the bands’ sets, so we knew we’d need plenty of angles and shots to work with,” continued Flood.

Cloud Production developed the video workflow around fibre, as it was more reliable over longer distances. In doing so, they could use the return feeds from the FoH (front of house) camera positions as a program feed for delay screens. A Green-Go intercom system was deployed on the Festival stage, and comms on the Rock stage was handled through the intercom on the Atem Television Studio Pro 4K, paired with Peltor headsets for the crew.

Flood explained that the ability to build in presets via the Atem and switch between setups for the different artists is very useful in a festival environment, where the turnaround is tight. “To ensure the guest directors had instant access to the inputs and naming protocols they wanted on the multiviewer, we preloaded specific setups for each act that we’d built,” he explained.

“We could then switch back ready for the next band. The system is so flexible, so it’s simple to incorporate additional cameras or aux feeds out for monitoring on request. Being able to cater for these requirements without any disruption to the day’s schedule is really vital.”

Sweden Rock was Cloud Production’s biggest festival production to date and the team was impressed with how the solution performed in such a pressured environment.

“Most of our team are musicians, and they can apply their sense of rhythm and tone into our video productions,” concluded Flood. “We had some great feedback from the technical supplier and the directors on site about the quality of our productions, and I think that it’s this combination of musicality and the flexibility of the Blackmagic Design hardware that allows us to translate this into really atmospheric and engaging live video content.”