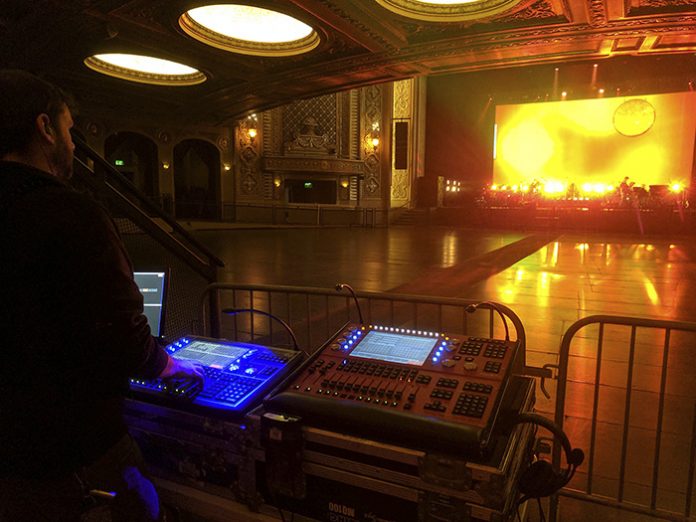 Describing Father John Misty’s recent shows as concerts, doesn’t quite do them justice. Sure there’s plenty of good music on the artist’s current tour in support of his Billboard chart-topping Pure Comedy album which backed up by a 15-piece band that includes horns and strings, but his engrossing and provocative performance is almost as theatrical as it is musical.

Throughout his two-hour plus show the artist, whose real name is Josh Tillman, moves from captivating the audience with his rich lush sound, to startling them with theatrical flourishes. Dropping to a knee and clutching the mic to his heart one minute and emulating the hand gestures of a preacher the next, he enthralls audiences with his mix of music and drama. Supporting this multi-faceted performance every step of the way is an equally engaging and varied light show that Designer Peter Zellan is running with a ChamSys MagicQ MQ80 console.

Zellan, who has an extra wing with his console and has a rented MagicQ MQ100 as his backup, is using three universes for his 50-plus fixture ground package and an extra universe for his Catalyst Media Server. He designed the show with Capture Atlas Symphony Edition and is using Art-Net control protocol.

The flexibility of this package is playing a key role in the success of Zellan’s design for this uniquely varied international tour. Using his ChamSys desk, he moves seamlessly from sidelight stage washing in rich blues and reds, to rock style back lighting and aerial effects, to panoramic backdrop accenting, to theatrical spot and key lighting.

“ChamSys is able to move from being a cue by cue theatre desk and punt desk with no trouble,” said Zellan. “Having a desk that can be both of these things in one show is essential on this tour. Pure Comedy is almost more theatre and stage than rock-and-roll,” he continued. “The new songs in the show are all arranged with lots of very specific lighting and video cues throughout each one of them. The songs on the artist’s previous album lent themselves to a more rock-and-roll vibe.”

Zellan, who began working with Father John Misty on the artist’s previous album, discussed the difference between it and the current tour. “The new songs are all cued out and much more stringently than the older albums, as we have a string section and horn arrangements,” he said. “All the songs off Pure Comedy are cue by cue and operated theatre style, the older songs off Fear Fun, and Honey Bear are punted with a page per song.”

For the older album songs, Zellan uses a page per song with a preset cue that plays during page changes with his initial colours and positions. “From there it’s mostly all fader moves. I have everything I need spread across the ChamSys extra wing,” said Zellan. “Every now and then I’ll jump into the programmer, but 99 per cent of the time everything is on the playbacks.”

Unlike the previous tour, Pure Comedy also relies on video to convey some of its dramatic themes. “This is my first tour incorporating video,” said Zellan. “It was certainly a learning process, but ChamSys deals with media servers so elegantly, it really hasn’t been that much of an obstacle. Getting around the content and server option with my MQ80 is a breeze.”

Zellan is running a Catalyst Media Server with 12 layers. He has a master stack for lighting and another master stack for video for each song. Using cue stack macros to fire the video stack from the lighting stack, he finds it easy to keep play button presses to a minimum.

“Overall, in terms of managing video and everything else for that matter, the MQ80 helps me stay organised when I tweak lighting or video for this show, which I do on a daily basis,” he said. “When you’re lighting a show as unique as this, you want the freedom to evolve and create without getting tripped up by organisational issues. This is where the MQ80 shines.” Zellan concluded.