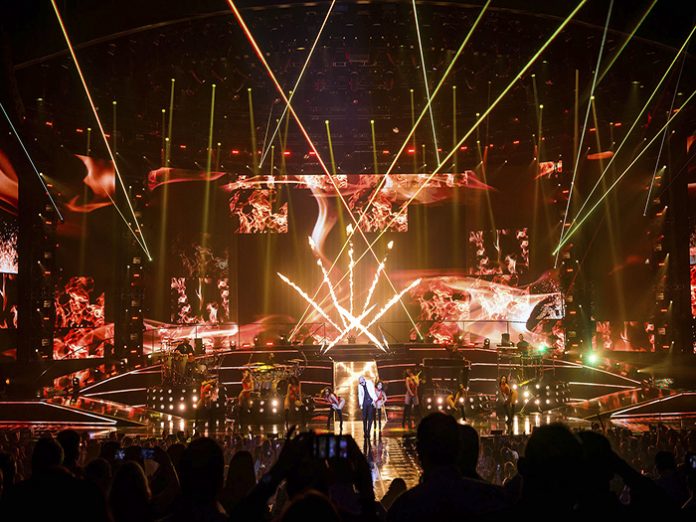 Sutherland has incorporated 110 Robe Spikies into his rig and the super-bright luminaires are holding their own in a substantial lighting rig of over 600 fixtures. The 4,600 capacity Axis Theatre has a massive curved house video wall at the back which is included in the technical package, so Sutherland’s design was evolved around that. With the auditorium also being curved, Sutherland wanted to ensure that everyone, wherever they were seated in the house, received a fantastic visual experience, so he added 4 screens downstage left and right to maximise the space and sight lines.

The Spikies were used to define the 90ft curved truss that outlines the shape of the set, known as ‘The Beast’. Onstage, 12 towers follow the curve of the set architecture, and each of these was also rigged with 5 Spikies, and more Spikies are positioned on the scenic ramp traversing the stage.

Sutherland chose Spikies because he needed something with “high impact and flexibility that wasn’t going to swallow the entire budget.” The Spikies were supplied, together with the rest of the additional lighting package, by PRG.

During the show, the Spikies are used extensively. “They are perfect for this,” Sutherland declared, “I love how I can create absolutely enormous looks with something so small and cost effective.”

Lighting, video and lasers all worked together in harmony for the performance, and Sutherland spent serious time and energy on making sure that each element compliments the others and that they all have their moments. Building the show, he worked closely with programmers Nick Hansen (lighting & video), Craig Caserta (lighting) and Lawrence Wright (lasers). They used MA Ligthing grandMA consoles for lighting and video and a High End Systems Hog4 to run lasers, with Green Hippo Hippotizer media servers.

Sutherland thinks the general advancement of technology in the industry in the last 10-15 years has been rapid, and the pressure is on for manufacturers to keep innovative and ahead of the game. “Robe is one of the companies at the forefront of invention, and as designers we really rely on this initiative and foresight,” he said.