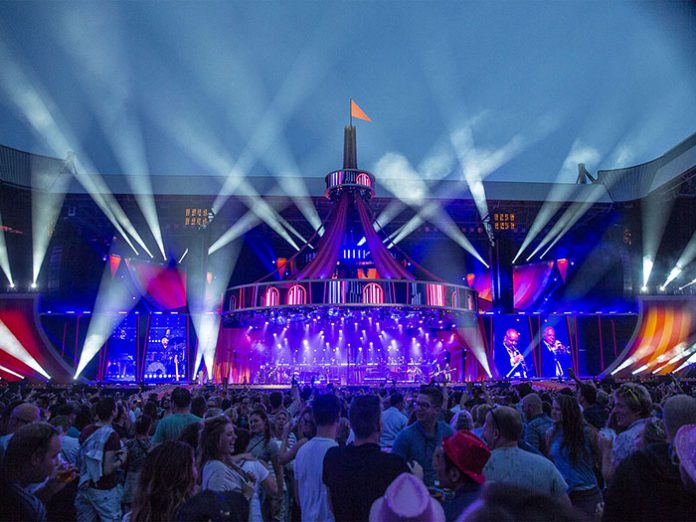 The Philips Stadion in Eindhoven served as the venue for four sold out concerts by Dutch singer/songwriter Guus Meeuwis, with 360 Robe moving lights catching the action as part of a lighting display designed by Marco Driessen from The Art of Light.

Lighting up the eight-piece electronic band and an 18-piece orchestra were Robe LEDWash 300’s, installed in the low roof above the band area, and BMFL WashBeams, rigged around the top levels of the set. Another BMFL WashBeam was used in follow spot mode in the mid-stage roof; 37 of the fixtures were used in total. 22 BMFL Blades were dotted around the stadium stand roofs, along the back of the central circular section of the stage and on the PA delay towers and used to highlight the detailed set décor.

Also on the rig were Robe Pointes, 48 of which were positioned along the walkway around the arena floor, with six on the B-stage at the front, 15 in the towers filling the spaces in between the curves of the different set flags, 12 behind the band, eight on the risers and the rest scattered around the over-stage trusses.

A total of 117 LEDWash 800’s were rigged all over the roof structure and stage trusses and used for creating base washes and lighting both stage and audience. Eight LEDBeam 1000’s and three PATT 2013’s also featured.

All lighting equipment was supplied by Utrecht-based Ampco Flashlight Rentals, brought in by Sightline Productions, who coordinated all the technical elements for promoters Modestus.

The Art of Light’s Andre Beekmans assisted on the programming and operating.