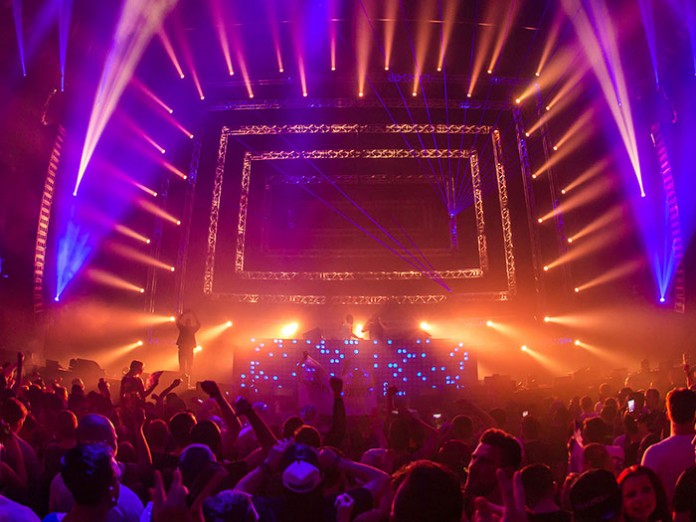 Nearly 250 Robe moving lights helped shape the drama and magic at the high energy 2016 Reverze spectacular produced by Bass Events and staged at Antwerp’s Sportpalais in Belgium, which was packed to its 20,000 capacity with hard dance music fans. The theme for Europe’s largest indoor hard style event this year was ‘Deception’.

A spectacular lighting, set and visuals design was imagineered by Kristof van Mensel, Patrick Bellens and others from Belgian visual design practice, TCF. Playing on the theme – which offered some serious latitude for invention – their starting point for both lighting and video designs was having lots of unpredictable visual tricks up their sleeves …. which could be revealed as the night unfolded.

The lighting equipment was delivered by rental company Phlippo Showlight and included 180 x Robe Pointes – all fitted with the TV colour wheel offering an enhanced selection of camera-optimised colours including a 2,700 CTO, a lavender, a pink and a laser green together with 36 x LEDWash 1200s and 20 x LEDWash 600s. A trussing mother grid was installed into the roof of the Sportpalais with the technical production overseen by Kristof Devrise, and this facilitated all the automation elements from WIcreations, and positioning for lighting, audio and video kit.

24 of the Pointes were on the stage deck, with 24 above a large LED wall onstage behind the DJ booth and a third set of 24 on eight moving pods over the stage. The other 108 were positioned in groups of 12 rigged on nine automated video pods which flew up and down the length of the venue above the audience. The Pointes were used for a variety of functions – creating high speed movement effects, for punchy beams, for eye-catching gobo looks and for spectacular prism moments.

By grouping the fixtures together inside the venue, both onstage and on the moving pods, they increased the perceived depth in the space presenting a myriad of alternative optical ‘deceptions’ with mind-boggling colour combinations and zoom effects. “It’s great, especially for a full-on high-energy show like this, to have a fixture as properly versatile as the Pointe,” stated van Mensel.

The TV colour wheel was specified as they believe the colours are more intense and give a greater range of different options, enabling them to combine saturated reds, blues and greens with subtle pastels. Other reasons for choosing a predominance of Pointes were the brightness and fast movement. “Speed is a MUST on a show like this,” said van Mensel, adding: “We describe it as a hybrid fixture because it combines sharp beams with soft spot-light and wash effects – this is also essential for this style of lighting”.

The LEDWash 1200s were on the moving audience lighting pods, chosen for their high output, good zoom range and the ergonomics of the fixture which really matched the overall look and feel of the show design.The LEDWash 600s were upstage on the stage floor behind the DJ booth, creating a powerful glow from the back utilising the wide zoom options and “fabulous” colour saturations.

van Mensel operated the show using a ChamSys MQ100 Pro 1024 with two Execute wings. “With a good and well thought-out range, Robe products give multiple options for every genre and style of show,” he said. TCF also created the event’s video design and worked closely with the team from Dirty Monitor who produced the video visuals, a flow of provocative and interesting content that really ‘popped’ out with 3D effects, shadow play and clever modelling of the Reverze logo, giving the Deception theme yet more extra punch.