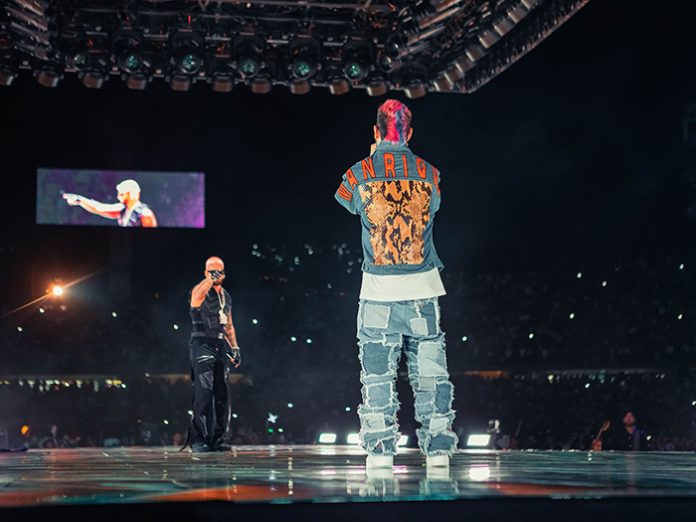 Not that Medellin needs putting ‘on the map’ of course, but the Colombian reggaeton superstar and the city’s very own pretty boy / dirty boy sold out its Atanasio Girardot stadium in a matter of nanoseconds for this one-off homecoming show that was as spectacular as it was popular, complete with an amazing lightshow created by Alain Corthout using over 200 Robe moving lights.

Corthout is already working on the artist’s ongoing US & Latin American tour with runs until November 2022, so for this special concert complete with a 22-camera shoot streaming via Amazon Music, he substantially upscaled set and lighting. It was also the first time that Maluma has staged such a big show in his lively and significant hometown, so the anticipation levels were ramped to the max.

A massive ground supported roof / stage system with 23 metres of trim height was installed in the middle of the venue, together with a cross-shaped video floor below which had the band positioned on risers in the four corners. Most of the lights, which also included blinders and some others, were rigged on and around the roof structure.

Paying in-the-round is a trendy concept right now as many artists want to feel physically close to their audiences again after two years of pandemic isolation and no large shows with real audiences. As we all know, it is also a more challenging environment to light and the aesthetics must be considered from all angles.

Eight motion controlled vertical trusses around the stage were each rigged with 12 x MegaPointes, and these flew up and down during the show.

Another 24 MegaPointes framed the 7-metre-wide by 10-metre-high video cube which was the set centrepiece. These lights and the video cube also moved up and down independently together with an outer shallower square of video panelling, all of it unfolding like layers of a giant chandelier.

Five MegaPointes were positioned directly in the centre of the video cube’s structure, with 48 Spiiders rigged on trusses sitting just inside the bottom edges the four large screens, which could cover all the required stage washes.

The balance of the Spiiders and MegaPointes were deployed above the roof trusses, with 32 x Spiiders allocated for key lighting dancers.

The 32 Tetra2s were ensconced under the transparent floor, up lighting the band, and Corthout also sourced 28 Robe ColorStrobes to use around the front of the stage as footlights. He had used the product before, but not in this context, and was pleased with the results, particularly with the way the colours matched with the other Robe luminaires on the rig.

The eight BMFL WashBeams were rigged on the four legs of the ground support structure, two per tower, and these were controlled via four Robe RoboSpot systems with the operators stationed at FOH. They worked as key lights and specials, and Corthout was delighted to be able to get them so close to the stage action. He found that adding the half-green and tiny amounts of magenta helpful to ensuring a great look on camera.

All the Robe lights were supplied by Genesis, one of the largest rental companies in Colombia whom Corthout noted were “fantastic!” He has worked with them before and likes the fact the kit is well maintained and in immaculate condition, and from a production continuity angle, he was keen to get all the moving lights supplied by one company.

Corthout is a great brand advocate for Robe and has used various products in his designs. He wanted plenty of MegaPointes on this show for their “brightness and massive versatility, especially for such a compact fixture,” and he also appreciates the speed, gobos and colours.

Spiiders were chosen as a “solid workhorse fixture that can be used on any rig in any circumstances.”

It was however his first encounter with the sturdy Robe Tetra2, and he was very satisfied with the results – “they did exactly what I wanted in terms of dramatically up-lighting the band,” he said.

The galvanising elements of any large scale, high profile one-off show like this is delivering all the energy, colour and vibrance expected from the production to everyone’s expectations which is “a colossal team effort,” stated Corthout.

He directed the show over 5 days on site in Medellin with programmer Menga Cruz. The main grandMA2 console was operated on the night by Esteban Tosta Gil.

Maluma’s special guests for this highly acclaimed extravaganza included Madonna, Grupo Firme, Feid and more. It was a fantastic night of music, dance and performance and a huge success in getting Medellin even more ‘on the map’.