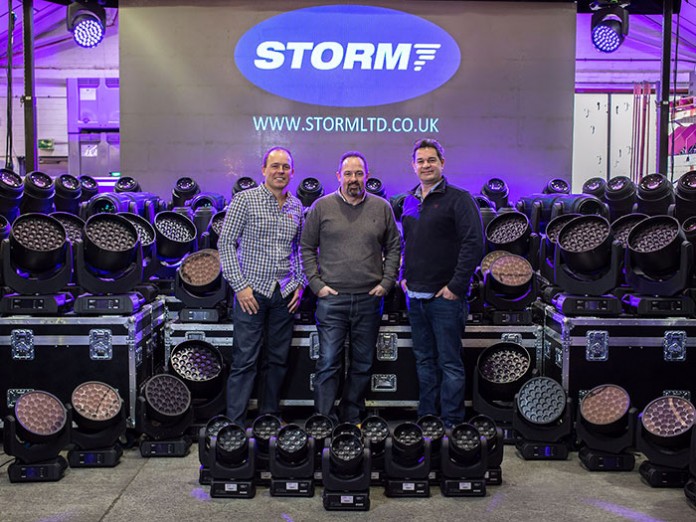 This new sale follows Storm’s initial Robe purchases made in 2014, of LEDBeam 100s, LEDWash 600s and Pointes. These fixtures have all been a great success, and impressed with their reliability and the excellent customer service from Robe UK, Storm founders Dave Knapp and Pete Kramer decided to continue their commitment to the brand. The BMFL Blades and LEDBeam 1000s replace some older moving lights from a different manufacturer.

Robe UK came to Storm and conducted a demo explained Knapp, “As soon as I saw the BMFL Blades I knew they fitted the bill! We were hugely impressed with the output, the speed and the compact size of the unit.”

They also have a major theatre tour upcoming that will be using the BMFLs, with the UK leg kicking off in the summer.In the meantime, the BMFL Blades and LEDBeam 1000s have been out on a host of other projects. They’ve been especially popular for film work and have been in and out of Warner Brothers Studios several times for various shoots, and have also been in action on numerous corporate events.

The LEDBeam 1000s were also purchased to compliment the LEDWash 600s which have become a real workhorse for the company. The LEDBeam 1000s’ 4-63° zoom makes them a fantastically powerful wash as well as an intense beam source and the individual ring control offers additional effects.

The new lights have also been used for a theatre production at the National Indoor Arena in Birmingham and by LD Jamie Corbidge for an event for tech giants HP staged at Tobacco Dock in London, which featured a stunning full ‘back wall’ of LEDBeam 1000s behind the stage.

Knapp’s perception of Robe at the moment is definitely as a leader in the moving light manufacturing stakes, “Robe seems to be taking a sizeable chunk of the market right now which is great to see,” he commented, adding that his crew all love Robe for adopting their ‘smaller-lighter-brighter’ philosophy.