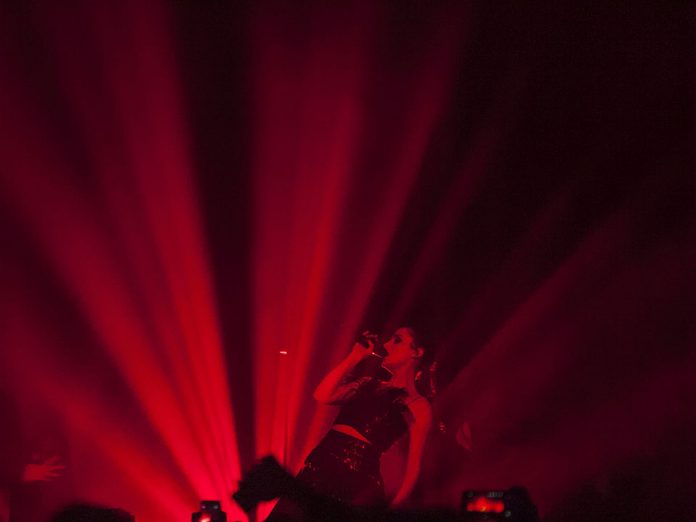 Talented rising star, singer/songwriter Banks has cultivated a reputation for being a little bit mysterious which has worked in terms of building a fanbase with a strongly melodic sound that’s been described as “dark R‘n’B.

With second studio album “The Altar” released mid-2016, the touring schedule and the production values moved up a level, and with that, lighting designer Ali Pike was asked to add her creativity. Robe Spiiders were the lights of choice for the first leg of European and UK dates.

Ali chose Spiiders for a number of artistic and practical reasons – tech’ing as well as operating on her own, she needed a lightweight fixture that was extremely versatile and basically a good tour hybrid floor package.

She received a few pointers from Banks’ management and creative team, including a preference for certain colours like red. They also gave Ali some video references to look at for general stage presentational vibe and ambience.

These, plus the physical considerations of the tour like stage and truck space, all informed Ali’s choice of fixtures.

Ali was curious about the Spiider, researched extensively and talked with some of the Robe UK sales team, after which she was confident that the Spiider ticked all the boxes and would be a good size for the venues, which ranged from 750 capacity up to London’s Roundhouse.

As it is a brand new fixture, she also showed the promo video to Banks’ management team who were impressed by the versatility and also agreed that Spiiders would be ideal for their tour.

When it came to loading the trailer with lights, there was exactly room for 13 Spiiders and a spare … so that’s what she took.

“They did all the hard work, all the big looks and all the key moments,” she explained.

Banks prefers subtle front lighting, so that was also a consideration and there were two dancers onstage for some of the set who needed illuminating in interesting ways.

The Spiiders were positioned all around the band risers where they could highlight the musicians with a more atmospheric and ephemeral treatment, rather than having a big light-show onstage. The upstage ones proved perfect for silhouetting and the stage clothes lent themselves well to backlighting.

Ali comments that utilising the wide zoom she could still create a wall of light effect even with the lights positioned only 2 or 3 metres away.

Two were reserved just for key lighting Banks who is very good at stepping in and out and playing with the light at certain points and each band member was also individually lit with a Spiider.

Ali was happy with the Spiiders’ performance and received multiple comments on the fixtures from venue house lighting staff and local crews, all of which has been positive. They were run in Mode 2, as pixel-mapping effects were not required in this show, however Ali still has access to the centre beam.

The music is dynamic in itself and having the dancers onstage brought additional depth and movement, which also meant that the lighting took on new significance with more than just a standard band set-up to treat.

She used the Moonflower effect inventively and spent a lot of time on the first day palletting plenty of good looks out of this. “I love the way that Spiiders can be effects one minute, and then you can apply the zoom and can get a pin spot or a wide beam”. It was great fun experimenting with them and she is “impressed with what’s achievable”.