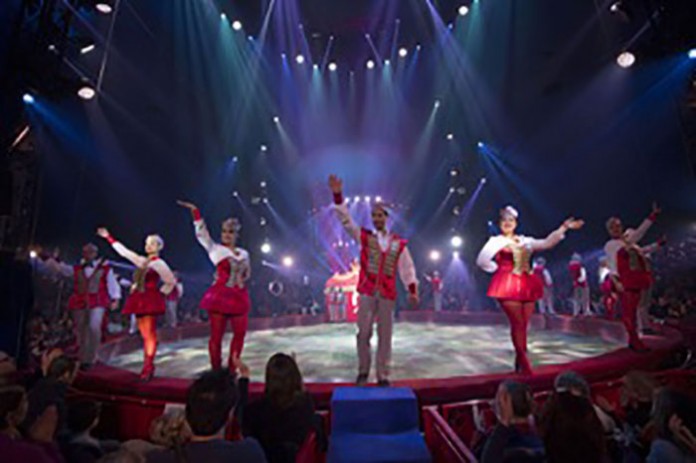 Robe BMFL Spot moving lights have been specified for France’s famous Arlette Gruss Circus show which started its 2016 winter tour at the Place des Quinconces in Bordeaux. Since 2009, the show has been staged in the 1,500 seater ‘Cathedral’ tent venue, an impressive structure that features eight masts and is 83 metres long by 49 metres wide with 20 metres of headroom.

With those dimensions, they needed a spot fixture with some serious brightness. They also wanted a unit that was flexible and properly multi-purpose. The 11 x BMFL Spots – replacing older 1500W series moving lights from another manufacturer – were delivered by leading French rental company Dushow after being chosen for the lighting rig by Circus lighting designer Arthur Oudin. Dushow has enjoyed a productive long term relationship with the Circus as a technical supplier.

Arthur Oudin and Circus stage manager Julien Lhomme initially saw the BMFL Spot in action during a Robe roadshow in 2014, and immediately saw its potential for the Arlette Gruss show.

Thanks to Dushow, who invested steadily in BMFLs throughout 2015, they were able to test the fixture during the summer and ensure it was exactly the right match for them. “It’s absolutely the most powerful spot moving light on the market right now,” he confirmed, “and this was our main requirement so it’s perfect”. Apart from brightness, they also loved the standard gobos which have proved very popular generally in the BMFL Spot.

The Circus lighting rig is flown above a custom made circular stage in the main performance ring, an essentially hostile environment for any technical kit which has to contend with severe heat – temperatures can peak in the roof at over 50 degrees – and humidity. Robe fixtures are however used to dealing with these extremities and tough operating conditions.

Recently in Brazzaville, Congo, BMFLs on the African Games Opening Ceremony lighting rig withstood a sandstorm, and BMFLs also proved impervious to dust ingress during the Nuits de la Guitare event in Corsica, where many other pieces of equipment failed due to the severely dry conditions.

The BMFL Spot fixtures were supplied to Dushow via Robe’s French subsidiary – Robe Lighting France SAS, one of a number of high profile successes reported by Robe France in the 12 months since the company was founded.