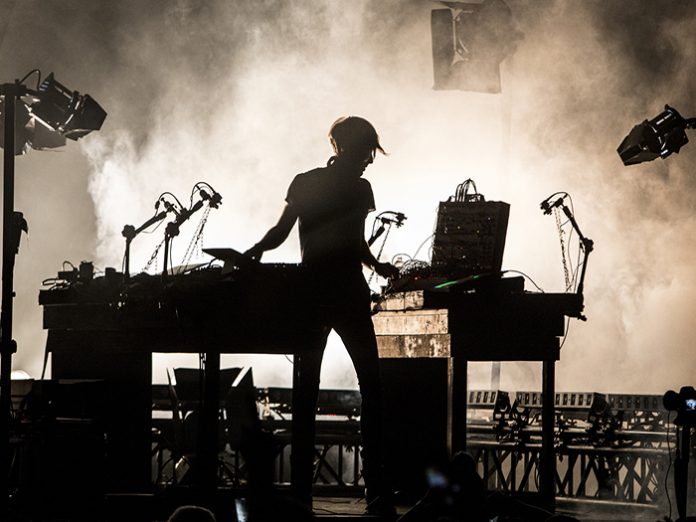 CLOSE, which debuted at Coachella Festival 2017, explored the relationship between man and machine and aimed to bring the audience closer than ever to Hawtin and his performance.

“Richie is a true live artist – all of his music and production is created live on stage, so every single show is different, as he will adapt his set, explore tangents and create new sounds,” Chris Lundie, Production Manager of CLOSE, explained. “We wanted to allow the audience to be completely immersed by this experience and feel as close as possible to Richie, so we took a long time to develop the unique staging and technology to accomplish this.”

Rather than a traditional DJ set up with decks between the artist and audience, Hawtin’s equipment was staged at either side of him. There were 4 small cameras placed in close proximity to his hands and body, with a fifth robotic unit above the set for top shots. Each camera channel was then fed back into a bespoke graphics software, which renders the images in real time into abstract and theatrical representations of the music being created on stage.

“We have a VJ operating the software alongside Richie’s performance, and they can select the best camera signal to best complement the beats on stage,” Lundie continued. “We use cameras with an infra red mode, and pair these with tungsten lighting, rather than the usual LED set up that you see on live events. This allows us to create very warm, theatrical looks, or we can also create a very dark atmosphere on stage, but still produce very bright images. This puts all of our focus on the music and Richie, so it’s an extremely immersive and inclusive experience.”

All of the signals and the live PGM mix for each individual show were captured by a rack of 6 Blackmagic HyperDeck Mini recorders. “Every performance is unique, and as such we wanted to make sure we could ISO record each camera channel for post production purposes. In order to achieve that we needed a reliable and cost effective means of video capture for a multi camera event,” Lundie added. “The HyperDeck Studio Mini was the perfect solution for a number of reasons. Not only does it mean we can capture to low cost SD media, it also records 10-bit ProRes files, which are perfect for our post production workflow.”

He concluded: “The HyperDeck Mini is great bit of production hardware for touring; being both compact and flexible. Not only that, it is also incredibly robust, having withstood the rigors of touring well so far. We have a rack pre-cabled so that when we arrive at the next venue, it’s just a simple case of plugging in, powering up and we’re ready to go.”