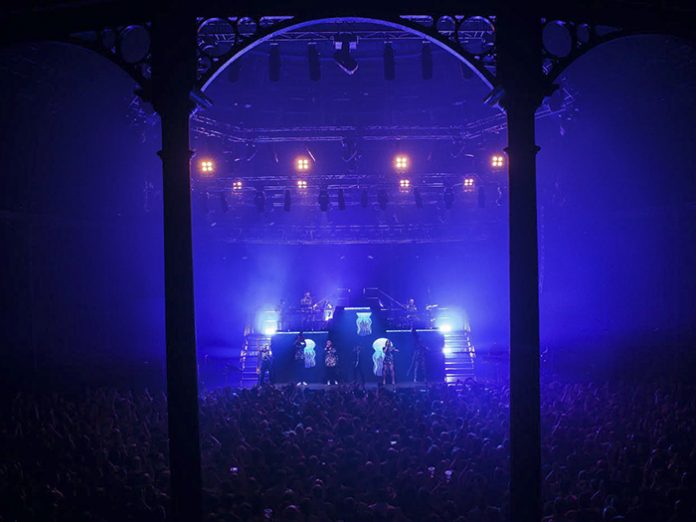 British dance group Clean Bandit has selected Really Creative Media to lead the design of their new stage show content and delivery ahead of the release of their upcoming Sophomore album. The new concept, launched at the bands’ one-off headline show from the Roundhouse, is a bespoke blend of VJ and time coded content, designed to be varied for each audience.

Jack James, Creative Director at Really Creative Media described the company’s innovative approach to designing the content. “The content creation approach was driven massively by the band and their vision for the new show. We also took guidance from the Show Designer Extraordinaire, Rob Sinclair, which allowed us to use some really creative visual techniques.”

“One trick, for example, saw us using video synthesisers that produce colourful oscilloscope-style patterns, which respond to the flow of the music during a performance. This is achieved by reacting them to certain audio frequencies, and gave a really analogue feel to some songs.”

“Everything gets more exciting when you have to plug in a certain piece of equipment to generate a piece of content. It feels a bit like being in a recording studio and using a certain instrument just because you can rather than letting the computer do all the work.”

Really Creative Media specified two Resolume Arena 5 media servers to drive the show, as well as all the packaging and pre-programming all the content for existing hits and some new tracks, including the brand new number one track, Rockabye.

The sold out Roundhouse show was one of Clean Bandit’s headline gigs for 2016, and the visuals set by Really Creative Media embraced the band’s eclectic blend of dance and pop with classical overtones. The live production company’s blend of content was crafted so the visual set could be responsive to the music giving a unique feel to each performance. By time-coding the content, the team has accurate references to what happens and what needs to change, allowing for seamless transitions between pre-set and VJ’d content.

Really Creative Media continued their relationship with the band, creating content for their Kiss FM Haunted House Party performance at Wembley Stadium. The three-song set featured the same approach and showcased visuals from the new show.