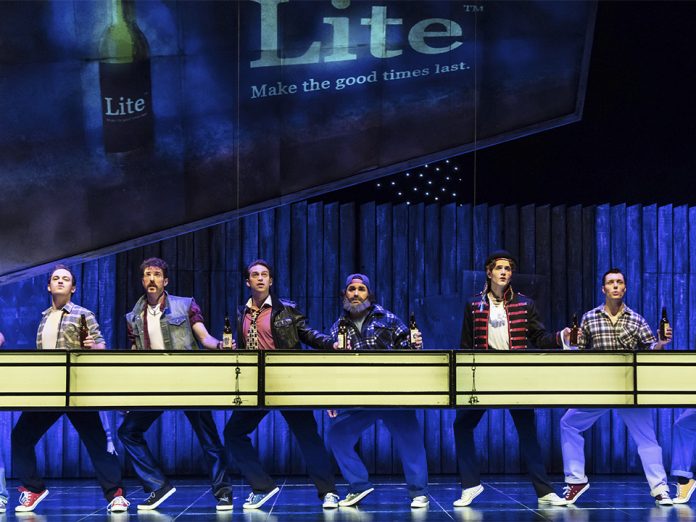 Live visual experts Really Creative Media worked with the theatrical production team Collective Productions to create a seamless visual experience for its first UK tour of the Wedding Singer from March to October 2017.

Perfectly complementing Francis O’Connor’s cleverly designed moving scenery, a Panasonic laser projector is used to create 80s style adverts and animation on a billboard in the centre of the stage, setting the scene for each part of the story.

Set in front of low-res high-brightness LED animation curtain, the projection content is time coded in synchronisation with this and Ben’s lighting for key musical numbers. Lighting’s use of an MA made Catalyst an obvious choice for playback. Ben’s wireless LED plinths are used as a variety of set pieces throughout the show, keeping the set dynamic and simple at the same time.

Show Producer Dan Looney explained; “We produced the show back in 2014 for a sold out charity event, raising a lot of money. We put together a brilliant creative team for this tour and now we have a UK Number 1 show on our hands, which is amazing. The set was designed as a collaborative project with the projection integrated as a seamless element. This has been a very cost effective approach to create an international level wow factor with no time or efforts wasted. It really looks cinematic and like it’s from the period with a star cloth backdrop.”

Dan was an actor in the West End and can mark the runaway success of The Wedding Singer as his first Producer role. He brought together director Nick Winston and Jack James of Really Creative Media as his creative team, who worked alongside Francis O’Connor to create a set worthy of a national tour with true 80s credentials and modern technology.