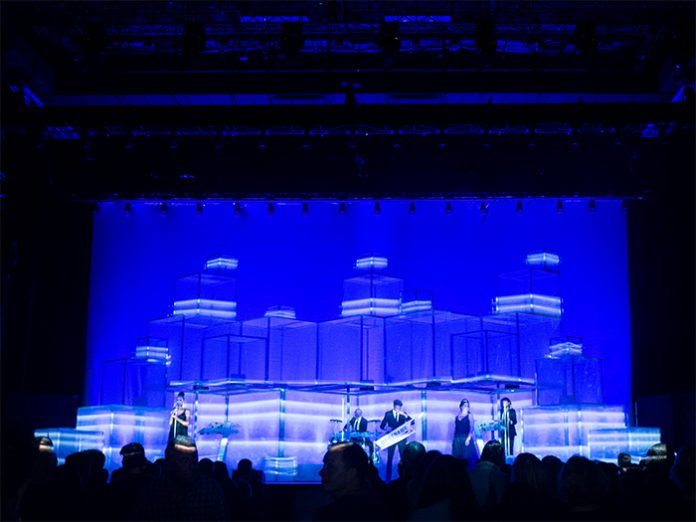 The Humans League’s 2018 Red tour saw the band use projection mapping for the first time, with creative content and equipment supplied by Really Creative Media.

The 28 date Red tour began at the Ancienne Belgique in Brussels on 31 October, landing on UK shores at the Cliffs Pavilion in Southend on Sea on 21 November, playing various size venues, from theatres and arenas, wrapping up at London’s Eventim Apollo on 8 December.

Really Creative Media (RCM) has worked with The Human League on previous tours, supplying video and server equipment as well as creative content and the band returned to their trusted supplier to push their visual creative for the Red tour.

RCM supplied an MA Lighting grandMA3 Light console and OnPC Command Wing as a backup console, along with 2 Catalyst V6 Media Servers, 6 Panasonic RZ21K 20,000L laser projectors and 2 Panasonic RZ31K 30,000L laser projectors. These Panasonic projectors run with a laser light source rather than lamps, which means they are more reliable and the brightness is consistent throughout the projector’s lifespan. The set consists of stacked 3D giant cubes, some with the band inside, which meant projection mapping onto the front and rear surfaces.

RCM Director Nick Dew explained: “There was quite a variation in the size of the venues, so we had the option to swap between the RZ21K and the more powerful RZ31K, depending on what levels we needed to consistently achieve the wow factor for all of the audiences. We also invested in grandMA3 consoles, which give new features to expand our creative options.”

Really Creative Media’s Jack James was responsible for the designing and overseeing all of content in-house for the band. His brief was to make the cubes feel 3D and bring in movement, colour and life. James explained: “Whilst working with a 3D set was challenging to create content for technically, it was an opportunity to explore some of the old favourites of the projection mapping world, such as rotating the cubes and making the whole set fall down and rebuild itself, all synced to the track.”

The band have always led in their use of video. Show Designer Rob Sinclair, Lighting Programmer Liam Griffiths, Lighting Director Chris Steel and RCM’s team worked alongside the band’s Manager Simon Watson to make sure the Red tour continued that tradition with the introduction of projection mapping. Daniel Williams was server programmer for rehearsals.

Sinclair and James started the process in July, which gave plenty of production lead time to plan the creative content and which media servers to use. James explained: “We built 3D printed models of the set in advance to make sure the content would work. It requires very precise setup, so Mike Higgs (on tour) has to be fastidious to get every surface of the cubes in the same place every night, which can be a challenging process on a touring schedule.”