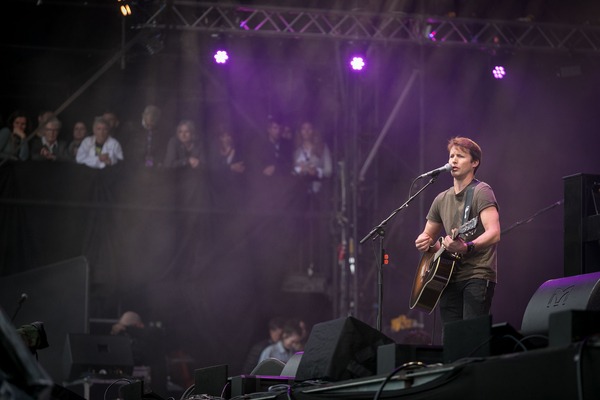 BBC Radio 2 Live in Hyde Park partnered with Capital Sound for another monumental production, successfully deploying their Martin Audio MLA PA to bring the summer season to a close.

With PA control and set up in the capable hands of system tech Toby Donovan production standards again met and exceeded the requirements of promoters, Festival Republic, and their Head of Production Dick Tee. The PA designs main hang comprised 16 MLA and an MLD Downfill each side, with 12 MLA per side, acting as sidefills.

Capital again fielded 26 MLX subs in a broadside cardioid array, 17 forward facing along the front, and 9 on top reversed. A pair of Martin Audio W8LM was positioned on every other sub stack, with a further stack of 3 W8LM as ‘wing fills’ on each side. Distribution around the site was via a 13-node Optocore fibre ring.

Martin Audio’s LE1500s were provided for stage monitoring along with some WS218X as side fills, while 12 DD6’s were stationed at the VIP interview stage outside, with 12 Martin Audio F8’s inside.

The sound design incorporated the additional fourth delay ring, introduced in 2016, giving 12 delay masts in total. 2 points were set 350 metres from the mix position, comprising 8 Martin Audio MLA Compacts to extend coverage to the main entrance gate but without any spill.

8 positions were equipped with three MLX in cardioid pattern. And It was the fourth ring of delays that enabled MLA to achieve the levels and contain the sound within the boundary, without exceeding offsite levels of 75dB(A).

Capital Sound Account Manager Martin Connolly, concluded: “It was fitting that such a great outdoor season for us ended with such a spectacular crescendo. Coupled with the success of British Summer Time, Hyde Park will leave many fond memories this year.”