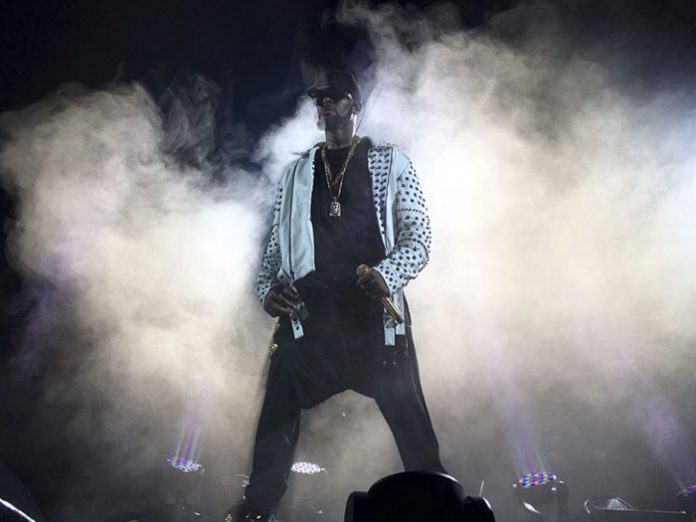 R. Kelly’s Buffet Tour is serving up a musical extravaganza, which fans are eating up in arenas across the US. Performance Lighting of Elk Grove, Illinois is providing 50 ChainMaster motor hoists and MA Lighting grandMA2 full-size and light consoles to the massive production. A.C.T Lighting is the exclusive distributor of both brands in North America.

The Buffet Tour kicked off in Cincinnati in support of Kelly’s eponymous 2015 album and played to packed houses from coast to coast. ChainMaster, headquartered in Germany, manufactures lifting equipment for the events and entertainment industry. Its chain hoists and chain hoist controllers are used worldwide by artists such as U2 and Paul McCartney.

R. Kelly met with Performance Lighting’s President Russ Armentrout last year to help design the tour. Kelly envisioned a dramatic and intricate ‘vampire’ theatrical sequence to open the show. Armentrout made it a reality by using kabuki solenoids, a 16ft spreading wing suit, dense low fog, coloured cryo-jets, intricate lighting cues, and a 25 by 40ft medieval-looking gate set piece that was cued to rise up into the air and clear the view to a 30 by 65-foot video screen.

Armentrout called upon Performance Lighting’s 31 years of production experience and support from production managers Camden Peterson and Matt Hubbell to design a superstructure truss to house hoists with 80ft chains to lift the gate set piece on cue. With its reputation for professionalism and clean rig design, Performance Lighting was also tasked with providing all the rigging equipment for the lighting, sound, video and set departments on the tour.

“To handle the rigging requirements, I wanted to ‘shoot out’ three well-known industry hoists,” Peterson continued. “So we called Shawn Sack at A.C.T Lighting to obtain a demo ChainMaster 1-tonnes Single brake, and it was a smooth-as-silk process. We had a demo hoist in our hands, pre-configured to our pinology, all within a week.”

Peterson convened a meeting of 10 of his crew chiefs and managers to evaluate the three sample hoists hanging on the test truss. “All of us were immediately drawn to the impressive low-profile chassis of the ChainMaster,” he recalled. “We loved the built-in handles, and admired the sleek chain, not as thick as the chain of the classic hoist we examined but with equal load-bearing capability. I also liked the added safety of the external chain stop that can lock a limit safety directly onto the chain.

“After debating the pros and cons of each hoist as well as examining manufacturer documents, the vote was unanimous to go with ChainMaster, so I bought 50 of them for R. Kelly’s tour,” he reported.

Peterson worked with A.C.T’s rigging specialist Shawn Sack throughout the process of rush purchasing the 50 hoists on a very tight deadline. “Shawn’s responsiveness to me was amazing! Every single email and phone call resulted in immediate attention to detail,” he said. “The 50 hoists – six with custom-length chains, all with locking latches, all configured to our personal connector pinology, all loaded directly into the tour rehearsals – worked perfectly with not a single concern.”

He adds that Sack’s “deep knowledge of rigging and hoists [meant] I’ve learned a tonne from him! He also turned me on to Upstate Case in Nashville where I was able to rush obtain 25 wonderfully low-profile tight truck pack dual ChainMaster cases, also right on time.”

Peterson emphasised that the entire process unfolded smoothly against a “severe” tour deadline. “I had to trust Shawn at A.C.T and Bill Whittaker at Upstate Case to provide the gear in perfect condition for immediate load in to R. Kelly’s rehearsals. There was zero available time for working out any concerns upon gear arrival should there have been any problems. I’ll admit that I was worried, but that was a waste of energy because Shawn and Bill came through with flying colours!”
www.actlighting.com