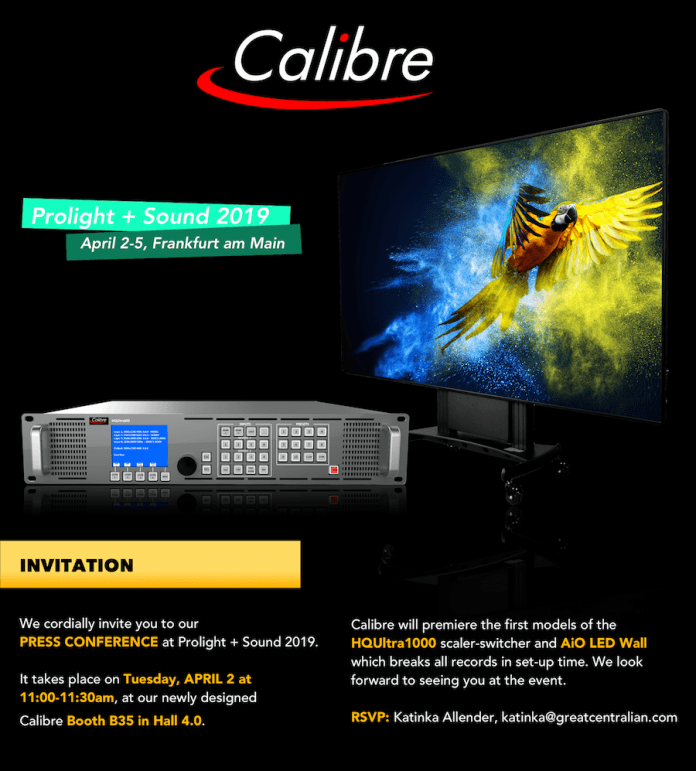 The first in the company’s HQPro series along with the new HQPro1050 remote controller will be available for Q2/2019 delivery.

“The HQPro1000 is the result of an extensive market research effort that revealed a real need for higher performance at lower price points,” said Willy Tsai, Managing Director at Calibre UK. “There is a whole market segment that is not being catered for – and we believe the HQPro1000 responds to what those customers are looking for by setting a new level of price/performance. It features extensive functionality that has traditionally been associated with a high price – and delivers it at a much more affordable level.”

Designed for professional ProAV and LED large venue applications, the HQPro1000 features a modular architecture composed of the base unit, two optional input cards and one optional output card.

The base unit includes two 4K HDMI 2.0 inputs, one 4K HDMI 2.0 output plus a confidence monitor output and genlock connectors.

The optional cards allow customers to configure the unit according to their specific requirements as well as providing a straightforward, cost-effective upgrade path should their needs change.

Designed with the user in mind. The HQPro1000 supports four layers that can be sized, positioned and mixed anywhere on the output display. Switching is achieved through seamless transitions, cuts or ultra-fast switching.

A future software release will add support for streaming video using the H.264 codec. In order to ease the unit operation, 10 presets are also included, allowing users to store and easily recall different screen layouts. Each preset stores the source, size and position, and all other attributes associated with each layer. The size, position and priority of all layers stored in each preset can be previewed on the front panel’s colour graphic display in a wireframe format.

In addition to the HQPro1000, Calibre will be introducing at Prolight + Sound the HQPro1050, a dedicated remote controller for the HQPro1000. The HQPro1050 communicates with the main unit via the LAN interface and allows users to fully control the unit from a remote location.

Users can also fully control the unit from the front panel, any computer or mobile device via the built-in webpage interface and soon to be released set of API commands.

“With the proliferation of screens and projectors; growing connectivity complexity; the increasing sophistication of viewers; and the fact that displays are becoming increasingly mission-critical in a range of applications – customers are demanding flexible, powerful, easily upgradable tools with which to manage them,” said Tsai. “The HQPro1000 is Calibre’s response to those needs. The range of features it offers, together with its high performance, makes it uniquely suited to the challenges of managing today’s – and tomorrow’s – displays.”