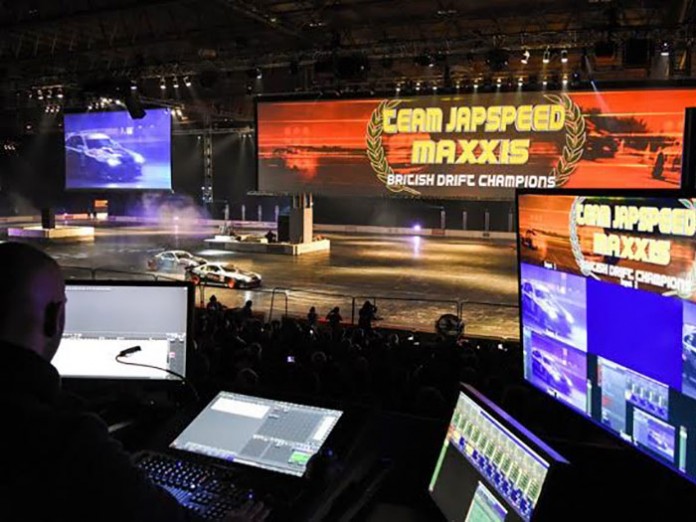 Autosport International is a globally renowned trade show, exhibition and performance car show created and managed by Haymarket Exhibitions at the NEC every January. Alongside appearances by current and former drivers and teams from a variety of motor racing series, one hall of the NEC holds the Live Action Arena, where members of the public can see an array of current and classic racing cars put through their paces by a team of expert drivers. For more than five years, PRG XL Video has worked with Malcolm Forbes of Waltham Services to provide projection in the Live Action Arena. For the 2016 show, the screen configuration was changed to place the projection screens in the centre of the arena. The central screen was 8 metres high and 40 metres wide, and flanked on each side by two 15 metre-wide screens.

Bringing the screens to the centre of the hall ensured the crowd had the best possible view, and to give the combination of playback content and IMAG footage the maximum impact, PRG XL Video Account Manager, Toby Evans, specified Barco’s highest brightness HDQ-2K40 projectors for the event, along with PRG XL’s Catalyst media server packages to serve playback content to the screens.

Evans said: “We’re happy to continue our working relationship with Malcolm and Waltham Services. This year our brief was to increase the visibility of the projection in the Live Action Arena, so the Barco 40k units were the obvious choice. With their massive 40,000 lumens output, they ensured that the audience had a really clear view of the high octane action and content on display.”