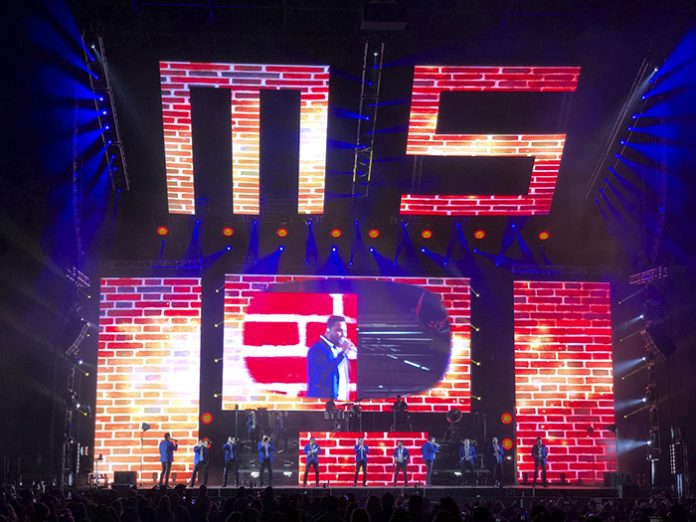 Numerous fixtures from PR Lighting were on duty when Mexican group Banda MS recently played. These helped Heriberto “Hammer” Montalvo and his team, alongside First Born Productions, to deliver a high impact concert that in view of its popularity was boosted with the addition of two additional shows.

In order to create maximum dynamics for this award-winning band, Hammer turned to Mega Systems, PR Lighting’s North American distributor, to provide inventory — including some cutting-edge products of their own.

For PR Lighting they deployed the popular new Showtec Phantom, rigging several of these fixtures on the truss — over the band and on the sides. Housing an Osram 440W discharge source, the Phantom is an astounding Beam, Wash and Spot hybrid moving head. With three different modes, the fixture comprises a 0°-2.8° beam (in Beam mode), 2.8°-60° (in Spot mode) and 10°-60° (in Wash mode), which allowed the unit to create multiple effects onto the crowd and stage.

This unit also contains countless vortex effects for aerial or kaleidoscopic projection, which added further visuals onto the stage. Aside from delivering animation effects, the units also created alluring rainbow effects and pulsing strobes, which perfectly complemented each song performed by the band — with the beams all brought to life by Mega-Lite hazers.

The Mega Systems products combined to produce three unforgettable shows — drawing a different crowd of over 1000 people each night.

“I have nothing but good things to say about the lighting provided by Mega Systems,” said Hammer. “The products we used were specifically chosen for this production, and I am more than satisfied.”