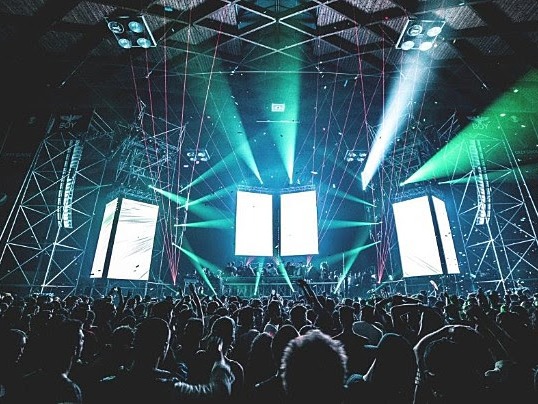 Launched last year, the Music Inside Festival ­(MIF) in Rimini this year saw PA and monitoring on all three stages at the Rimini Fiera provided for the first time by Loud Professional and powered by Powersoft X series premium amplifiers.

The winning combination of these two leading Italian manufacturers was selected by Amandla Productions, who had taken over the Festival’s technical production — as they immediately recognised Loud Professional’s expertise in delivering large-scale festival sound (and particularly EDM events).

“The synchronisation with Powersoft was excellent and we already have plans for to develop further projects together,” exclaimed Loud Professional’s Event Production Director, Francesco ‘Scody’ Scotti. “As for the new sub, we were delighted with the excellent results achieved.”

And so, it seems, was the all-star line-up of DJs appearing over the two days, including headliners The Martinez Brothers, Paul Kalkbrenner, Sven Vath, Chris Liebing, Loco Dice, Len Faki, Ilario Alicante and Sam Paganini.

In order to satisfy the requirements of some of the world’s leading EDM exponents, Scody confirmed that extensive testing had first taken place to establish optimum performance. “This necessitated creating a library of dedicated presets,” he explained. “The huge potential of Armonía [Powersoft’s digital signal monitoring and processing software], with its powerful DSP, has enabled us to fully optimize our system capabilities.

“The Powersoft/Loud Pro combination guarantees exceptional performances along with the powerful and easy system management.”

And the Loud production director went further. “In our quest for efficiency, the greatest benefits can be seen in both the precision and power. But power is nothing without control, and the limiter section, by virtue of providing many excellent tools, not only guarantees great longevity but also the perfect balance between each section.

“In fact the Powersoft processing system is probably the most powerful in the world, with the ability to offer supreme signal management. And as for economy, the X Series allows us to minimize the space and weight required while maintaining a high power output.”

Although Loud Professional is a relatively young brand, it has already been installed successfully in some prestigious clubs and has powered several electronic music festivals. Hence the brand has quickly built a reputation and become highly regarded among the best DJs.

But Francesco Scotti realised that it is in the low frequencies that the system will really be judged — which is where their new 21” sub comes into play. “Certainly the music programme absorbs a lot of low frequencies and these are reproduced faithfully and with great precision even when subjected to high levels of stress (such as a 12-hour festival). But thanks to the depth of control across the complete audio spectrum offered by Powersoft, we can control every single note with absolute fidelity.”

As for the speaker configuration at Rimini Loud Professional were across all three stages, with Michele Azzimonti responsible for the sound design on each. Particularly pertinent was the Green stage where Paul Kalkbrenner and Sven Vath provided a real tour de force into the early hours of the morning.

This stage was composed of two clusters of 12 Loud Professional VH Layer 212H, equipped with two 12” woofers in a hybrid configuration, horn loaded and tuned in a bass-reflex volume, along with two 6.5” horn loaded twin midranges and three 1in. drivers in combination with a planar wave guide — all driven by Powersoft X8 amplification.

Particular attention was devoted to minimizing the room’s reflections from the opposite wall to the stage with an accurate pointing of the systems, and with gain shading.

The subwoofers for this stage comprised 32 of the VH Sub 121H, equipped, in hybrid configuration (Horn & Reflex loaded), with a single 21in transducer and latest generation 4.5” voice coil. The subwoofers were arranged in eight blocks of four loudspeakers arranged in a line along the stage front.

The coupling of four cabinets allowed the system response to be extended down, while the linear layout ensured uniform horizontal coverage. There was no need to reduce the rear emission of the subs, as these cabinets already offer an exceptional directivity with a ‘natural’ cut off of the rear output.

Also used, as front fills were 10 VH SM15 speakers, equipped with a 15” coaxial woofer, to reinforce the front stage area not covered by the main clusters.

The main system was supported over the first 8m by the 10 front fill VH SM12H, featuring a 12″ high efficiency woofer and a 1.4″ compression driver, both neodymiums.

The 12 cabinets spread across the 18 meters of the stage front, created a control array up to a frequency far above the crossover frequency, ensuring uniform distribution. The end fire configuration allowed the presence of low frequencies on the stage to be minimised.

As with the other stages, all speakers were driven by the powerful Powersoft X8 amplifiers. Accurate load distribution enabled the potential of the amplifiers and the incredible dynamics of the system to be fully exploited.

Controlled with the Armonía software, the entire tuning of the system was achieved using the capabilities of the on-board DSP, while signal distribution was handled by a Meyer Galileo Callisto 616.

Finally, the smaller Red stage provided the greatest acoustical challenge because the bottleneck of the sidewalls, just few meters from the stage front, created a tunnel 20m wide, 50m long and 7m high.

Loud Professional VH Layer 112H were used in 2-way configuration — six cabinets per side as the main clusters. Two further systems, stacked over the subwoofers, served as front fills.

And the new FORMULA F221 passed the test on the Red stage with flying colours. Scodi spoke of the “Incredible frequency response and definition of these new cabinets that even in such an acoustically difficult environment allowed every single bass note to be fully appreciated.”