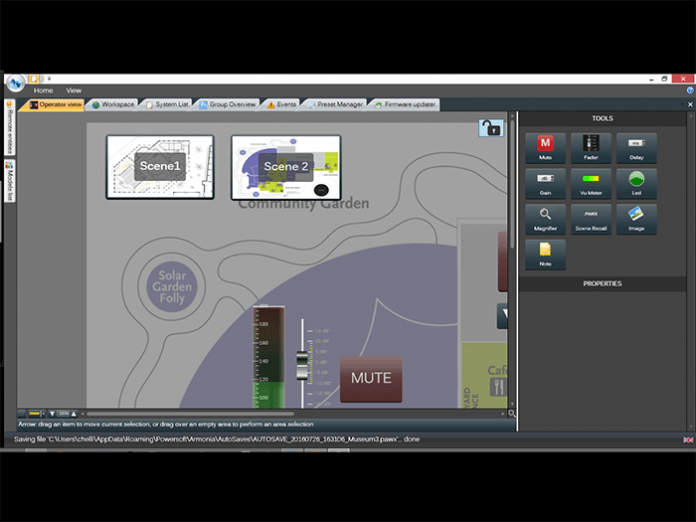 Powersoft has announced the latest software release for its Armonía Pro Audio Suite.

Armonía v2.8 adds a further set of features including operator view, which gives users the ability to customise new window tabs. Users can choose from a range of pre-configured objects with the following functionalities: mute, gain, delay, scene recall, magnifier to EQ window, VU meter of a selected channel, status LED, background image and notes. In addition to the operator view, the access manager now includes further access levels such as Admin, Engineer, Operator or Guest.

The new software release also sees the X Series fully integrated with diagnostic alarms that show up in Armonía in real time. The X series speaker preset library has also been largely expanded. Other new additions include: live impedance and history monitor on DSP4, management, availability of Dante and AES3 signal source on X Series models and Ottocanali DSP+D models.

There are improvements to GroupOverview: way names can be added to X series models and Ottocanali DSP+D models, while channels are now sorted by their amplifier name and channel index. There are also improvements on keyboard interaction without mouse usage.

The Armonía v2.8 software will also carry out minor fixes on X Series and DSP4 models.