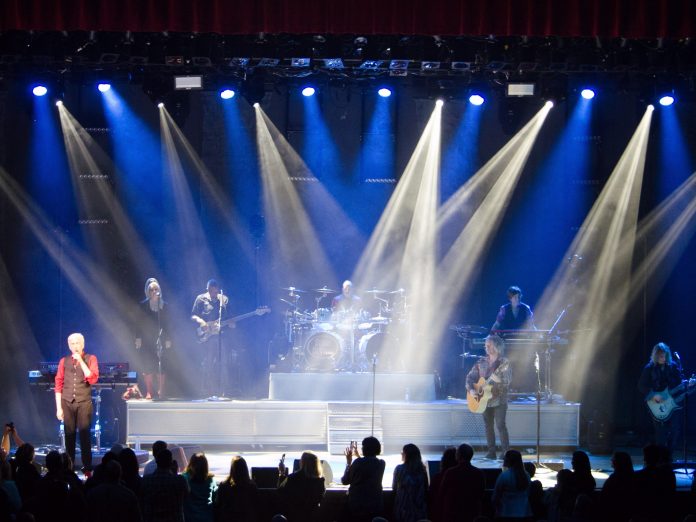 For the European run of the Australian Pink Floyd show, Capital Sound were again on duty, with the experienced FOH team of sound engineer Trevor Gilligan and system tech Mark Edwards at the helm. And from the moment the band launched into Astronomy Domine followed by Shine On You Crazy Diamond, the crowd at Guildford’s modern G Live were in raptures.

This tour has been no exception, although on this occasion they specified Martin Audio’s W8LC Compact Line Array, creating a library of presets for Powersoft’s proprietary Armonía software.

Gilligan was happy to adopt the brand, knowing he would have ample power under the hood and an efficient means of driving and controlling the system.

Besides, after 35 years in the industry — working with such bands as Kasabian, Starsailor, St Etienne, Buzzcocks and The Hoosiers — he remembers acutely how Powersoft’s amps brought to life the Outline Butterfly PA system on an earlier tour.

Sat behind his DiGiCo SD5, he said: “These new X8’s has completely opened up the whole sound field in terms of vocal separation. And the smooth, seamless power means you don’t have to drive them hard. Just like the last time I used Powersoft, you immediately notice the clarity and sonic power.”

He also noted how advantageous they are in terms of tour economics. “The UK tour package is now so compact that it requires a truck fewer than previous years. Every space saving helps, and certainly the X8’s has helped enormously in that respect.” He also said that throughout the long tour the amps have run flawlessly. “You just switch them on and off they go.”

For Conway, the purchase of the new X8 inventory was a no brainer after its long experience of Powersoft in the active Martin Audio systems they run in rental stock, including their flagship MLA. “When we made the purchasing decision we knew we were investing in a significant platform — it was totally logical and we had no worries about the reliability of Powersoft. It has amazing broadcast quality.”

He added that having recently converted to a Dante returns core, the X8’s onboard Dante facility provided a compelling reason for purchasing. “It made complete sense and simplifies the signal chain, with seamless integration. It is exactly what we are looking to achieve in standardising our rental infrastructure.”

Capital Sound run four touring racks, each consisting of three X8 — thus giving them 24 amp channels per rack. “This gives us just 12U of real estate, drawing very little power and easily fitting within a 63A, 3-phase touring power supply system; this makes it a hugely efficient option.

“On this tour the boxes have sounded incredible; having a powerful, DSP-driven amp with power, headroom, functionality and the ability to drive different boxes is perfect for our needs. Also, Armonía gives us massive control and flexibility — it means the signal chain is no longer convoluted because we can bring everything into a single piece of software.”

He concluded: “We are finding new features of X8 every day and going forward we expect more of our engineers to move from their present set-up onto Armonía.”