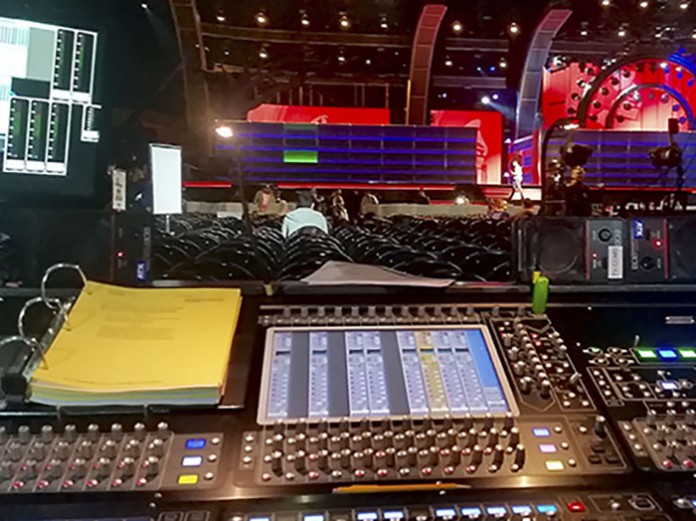 At the 58th Annual Grammy Awards, held at Los Angeles’ Staples Centre, amplifier manufacturer Powersoft delivered 720kW of reliable, clear audio to more than 18,000 attending music fans, in addition to a viewership of more than 24 million people around the world. In a touching night of appearances by Lady Gaga, Nile Rodgers, Jackson Browne, The Eagles, Chris Stapleton and many others, the performances included tributes to several artists the music world has lost this year: among them David Bowie, Glenn Frey, B.B. King and Lemmy.

ATK Audiotek was on hand to set up and deliver audio services for the gala event, which has been held at the Staples Centre for 16 of the last 17 years. With LL Cool J hosting, the Grammy Awards were bestowed on Bruno Mars, Ed Sheeran, Alabama Shakes and Meghan Trainor, who scooped up Best New Artist. Over the course of one of music’s biggest night, 72 Powersoft K10 amplifiers, situated in a dozen racks located around the venue, delivered reliable, smooth audio, powering all the stage monitoring, front fills and upper level seating areas.

With two main active stages in front of the venue, in addition to a dish stage near FOH, Powersoft K10’s provided a monitoring power to the system’s side fills, wedges and drum fills. Speakers consisted of two ATK C6 cabinets per side, four ATK M5 wedges across the front of the stage, a drum subwoofer consisting of an ATK CSW218 dual 18-inch speaker with an ATK M5 on top, and various ATK M2’s, which were dispersed and placed according to the various artist needs throughout the evening.

Front fills consisted of 12 JBL VRX932’s across the top, and several ATK CSW 218 subwoofers, placed for ground fill in front of the stage. The top seating level of the venue was covered by several ATK C6 cabinets, placed in proportional distances around the upper perimeter of the venue. Mikael Stewart, ATK Audiotek’s VP of Special Events, said that the sound of the venue is more or less predictable: “The Staples Centre was built more as a sports venue than a concert venue, and it never changes acoustically or structurally. Therefore the tuning and sonic adjustments we were making were based on the scenic design.”

Powersoft’s Armonia DSP system played an integral role in set up and room tuning, since ATK was able to leverage DSP pre-sets from Grammy Award events held at the Staples Centre. “We can easily call up previous years and previous show settings from this venue, fire them up and be ready to go,” he added. “This saves a tonne of time because we don’t have to start from scratch when we are tuning a room, and of course time is at a premium,” added Stewart.

Despite the convenience of set up, Stewart asserted that reliability is the single, defining factor for a high-profile event such as the Grammy Awards: “Everyone is going to have a comment or an artistic choice on a certain sound, depending on where they are sitting in the room, or how a speaker sounds. But when it comes down to it, everybody notices a failure, and we can’t afford that,” he said. “We are never concerned about a Powersoft failure, and they have proven to be extremely reliable.” Powersoft is a “very smooth sounding amp”, and that the addition of Armonia software only “adds to the cache of Powersoft,” he explained.

Beyond the reliability, great sound and tangible time reductions, Powersoft amplifiers continue to deliver on efficiency measures, particularly when it comes to the amplifiers’ tremendous output capability and minimal physical footprint. “The fact that we can get so much power into a 6U rack is always a consideration and a definite savings,” Stewart observed. “When we are pairing up these Powersoft amps with JBL speakers that have to travel across the country, trucking weight and volume counts. Producers are very aware of potential cost savings in these areas, and it’s another way Powersoft routinely delivers for us.”

Although the event was once again a rousing technical success for ATK Audiotek – and by extension Powersoft – Stewart stated that the evening’s tribute performances were bittersweet. “We lost many A-level musicians this year, and the many tributes at the show last week were very moving – particularly the David Bowie sequence by Lady Gaga and Nile Rodgers. This emotional connection is a reminder of why many of us got into this business in the first place.”