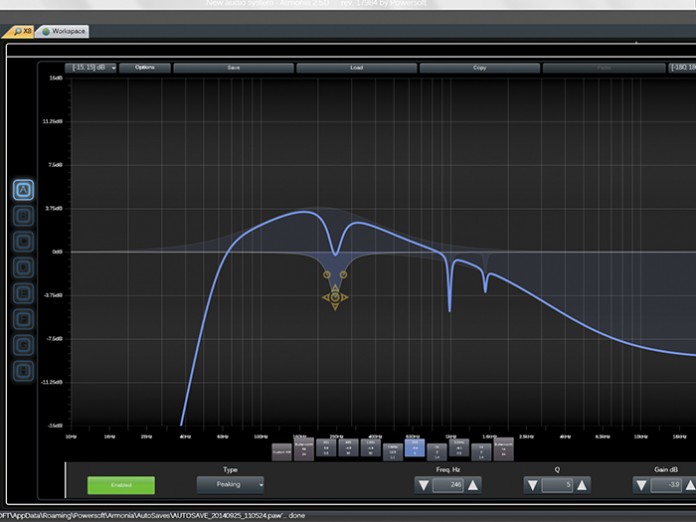 Powersoft has released an update for the latest version of its Armonía Pro Audio Suite that includes a new speaker preset v2 (spk2) file format.

This file can be copied directly onto X Series amplifiers with a USB stick, to be recalled later on desired channels via the WebApp interface.

X Series and Ottocanali DSP+D amplifiers are now able to act as totally configurable Dante sources, with the option to stream out eight processed or unprocessed signals. Standalone analogue to Dante converters are therefore no longer necessary in complex installations, and direct monitoring of the DSP processing can be easily achieved in third party measurement software such as Smaart v7.

A higher degree of loudspeaker supervision is achievable with the new Live Impedance curve, calculated in real-time and storable/displayable against a reference curve in the new spk2 preset files.   New RMS and Peak limiters with side chain Frequency-Shaping are now available on X and Ottocanali DSP+D Series, allowing an even greater level of protection and performance.

Frequency-Shaping, in conjunction with Live Impedance monitoring, is an irresistible combination, which safely pushes the speakers even further in terms of overall SPL.   In fact the entire communication protocol has been completely rewritten to achieve better performance.

Thousands of parameters are now sent in a fraction of a second, allowing for lightning fast operation with X and Ottocanali DSP+D Series devices. In conjunction with the latest firmware, the response to Advanced Groups raised cosine equalisation is faster than ever, and most importantly synchronised across on all channels.

In addition to X Series and Ottocanali, the new Armonía release is also designed to offer improved functionality for the M-Drive, DSP 4 and IPALMOD models.   Alongside the new release of Armonía Pro Audio Suite 2.7.0, Powersoft has provided full online assistance for Armonía users. This is a useful, fully-accessible tool enabling issues to be solved in any circumstances.

The Armonía release is available to download on the Powersoft Armonía Forum together with the Ottocanali firmware. Otherwise, the new X Series firmware is available to download into the new forum designed exclusively for users of the new X Series.   Besides firmware updates, inside the forum it will be possible to access direct support from Powersoft engineers, discuss ideas and requests for new features, exchange customised speaker presets with other users and be kept up-to-date on all new developments regarding X Series amplifiers.