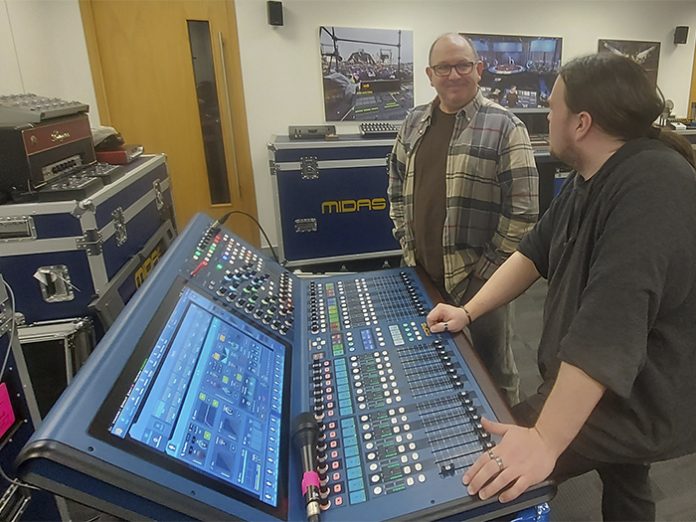 Based near Glasgow, Danny Anderson is an experienced audio professional whose understanding of the live events world is thorough to say the least. As well as being an in-demand freelance sound engineer, Danny is also an events creator, designer, planner and production manager, whose career has encompassed everything from operating recording and rehearsal studios to managing large scale corporate events and festivals. Throughout his long and distinguished career, though, whatever his responsibility at events, his hands are never too far away from a mixing console.

Always keen to stay ahead of the game, Danny recently invested in a Midas Heritage D, HD-96-24 console, following its introduction and demonstration to the UK market by POLAR Business Development Manager for Pro Audio, Nick Bellis.

Danny Anderson comments: “I’ve operated Midas PRO series desks for well over a decade now and the Heritage-D is the natural successor. It’s an excellent machine – it sounds like a Midas but with much greater capacity, better onboard reverbs and FX, and has a much easier workflow with an excellent large touchscreen. I’ve had great after-sales support too from both POLAR and Music Tribe on the HD.”

Since becoming part of Music Tribe’s Super Partner Family last year, POLAR has been at the heart of reintroducing the direct supply of Music Tribe’s leading brands to the UK, including Midas, with Nick Bellis taking the lead: “I’ve known Danny for over 20 years; he’s a wonderful engineer and an even better person, so it’s always a pleasure to help supply him with Midas and Klark Teknik products. With Midas HD-96 Danny has the most powerful desk they have ever made and it’s great to have the continuing support of such an experienced professional for the brand in Scotland.”

As the first freelance engineer in Scotland to adopt the HD-96, Danny Anderson has wasted no time in getting to grips with his new console, and has already combined some on-the
-job familiarisation at gigs with some training hints and tips on a recent visit to Music Tribe’s Manchester HQ with resident Midas guru, Max Marriot.

POLAR Business Development Manager Andy Plunkett was in attendance: “To have an engineer of Danny’s calibre on board as an early adopter, and to hear his unreserved enthusiasm and praise for the system is really pleasing. Nick did a terrific job last year finally introducing and demonstrating the long-awaited HD-96 throughout the UK – and continues to do so. We’re looking forward to adding to the growing list of Midas Heritage owners in 2023 as more industry professionals see that this desk is the real deal.”