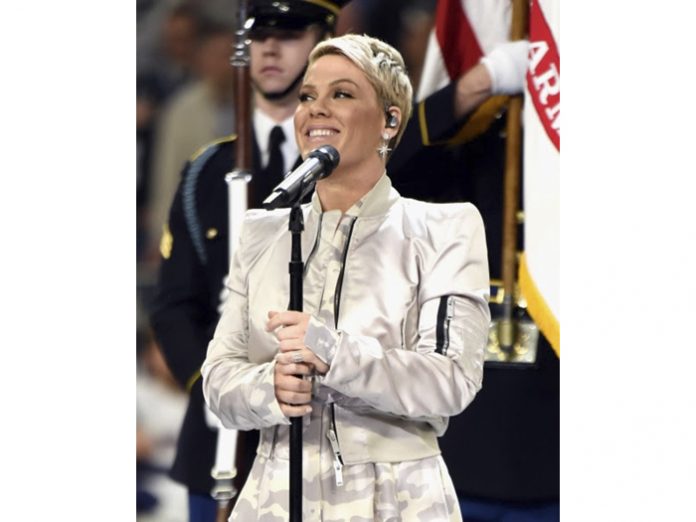 P!NK performed a rendition of the U.S. national anthem, The Star-Spangled Banner, at Super Bowl 52, sung through a Sennheiser Digital 6000 wireless microphone system.

The P!NK team have been using the Digital 6000 system while touring and appearing on high-profile television programs and award shows such as Saturday Night Live, the Grammy Awards, the Video Music Awards and others.

“For an artist whose vocal performance is so well renowned, it is important for us to have the ultimate equipment specification both on tour and during the Super Bowl,” said Jon Lewis, Monitor Engineer for P!NK. “We have a very strong relationship with Sennheiser, and the Digital 6000 enables us to attain the best digital audio quality as well as dependable RF.”

P!NK sang through a Sennheiser SKM 6000 handheld transmitter, coupled with an MD 9235 capsule. “We have always been really happy with her voice on the MD 5235 capsule, so when we moved over to the Digital 6000 series, it was a very natural progression,” Lewis explained.

Front-of-House Engineer Dave Bracey has a special affinity for the new Sennheiser Digital 6000 system and its role during an artist performance: “The reason I love that microphone is because it is able to capture the complete character and nuances of a singer’s voice,” he said. “In fact, it is capable of reproducing the exact character of whatever you are miking up — including the best live singing voices in the world.”

For Lewis, the Sennheiser Digital 6000 series succeeds on a number of fronts, most importantly on the stage: ”I first used the Digital 6000 on a recommendation from Dave [Bracey], who had used it with Adele. Since then, I’ve just been blown away with the distance range and quality. It has proven to work equally well on both in-ears and through wedges, and the microphone itself can handle being in environments with super-high noise levels like the Super Bowl.”

Byron Gaither, Artists Relations Manager, Professional Audio at Sennheiser, said: “We are honoured that our microphones and wireless systems are continually used by singers who are at the top of their game. With the Digital 6000 Series wireless system, we have opened yet another chapter of innovation, audio quality and reliability.”