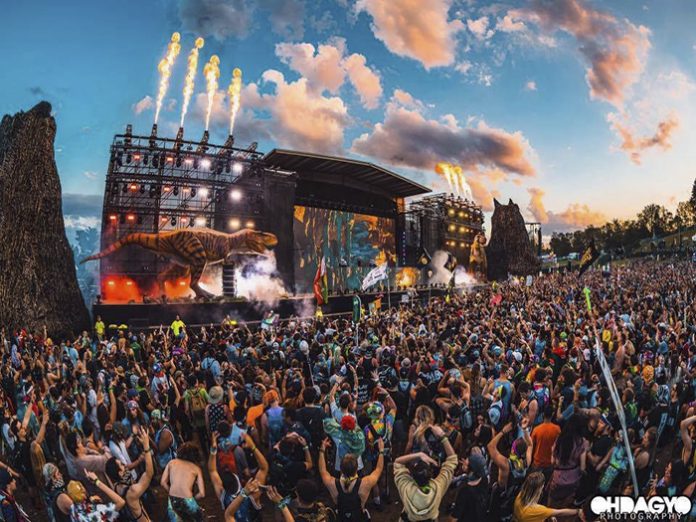 Excision has been an honorary member of the PK Sound family for over a decade. The Lost Lands team treated festival goers to an immersive experience of visuals, clean bass, and a family of life-sized dinosaurs.

“The scale of Lost Lands started out a lot smaller, we were initially hoping for 10,000 people, but when we went on sale and sold nearly 20,000 tickets in the first 48 hours we realised that not only was demand far greater than we thought – so were the expectations,” Excision commented. “I think the biggest key to our success was that we literally threw our entire plan out the window that day, 2 days after launching, and started over from scratch, with the goal of making it the best possible festival we could.”

This required an equally massive sound experience which was provided across 2 stages by PK Sound. Stage 1, also known as the Prehistoric Paradox stage, deployed the powerful Trinity line array. The main hangs consisted of 16 modules per side, as well as an individual hang of 12 modules to fill the VIP section. Additionally, the PK team deployed 12 ground-stacked VX-10 line array modules for on-stage out-fill (6 per side), 8 VX-12 line array modules for front fill with field delays consisting of 16 additional Trinity modules, 8 per side.

For the low end, PK brought in 78 CX-800 subwoofers. Only partial cardioid deployment was necessary to control the sound field off axis at the Lost Lands festival grounds at Legend Valley. On stage monitors consisted of 4 VX-10 line array modules (2 per side), 2 CX-800 high powered subwoofers (1 per side) and 6 SW-215 stage wedges.

Not to be outdone by the Prehistoric Paradox stage, the Cave of Souls stage was located beneath a massive festival tent structure which housed 2 main hangs consisting of 24 Trinity line array modules (12 per side). Main front fills consisted of 4 VX-12 line array modules which was all balanced with a smaller configuration of 42 CX-800 high powered subwoofers. The stage monitor set-up consisted of 4 VX-12 (2 per side) with an addition of 2 CX-800 (1 per side) for the low-end. In order to provide an accurate sound experience for the performers, 6 Klarity-12 speakers were utilised as stage wedges for the downstage mix.

“The sheer power of Trinity is mind-boggling,” said Lost Lands second stage FOH System Tech, Kyle Pace. “The design is flawless and it actually feels and looks like it’s built to push limits. A great aspect of Trinity is the control you have over your horizontal directivity while the array is in the air. Being able to change from 50-degress to 120-degrees mid show or in any tight situation gives the engineers on site unlimited capabilities. The fact I could carve the audio asymmetrically off the walls in the AG Mega-Structure was incredible. Focusing the top boxes in to 60-degrees symmetrically gave me tons more horsepower in the far field.”

“Being able to steer the sound waves with PK’s moving line array allowed us to tune the sound to near perfection,” said Excision, “The cardioid setup on the subs allowed us to pound the music without pissing off neighbours to the rear!”

One of the main challenges faced by Excision and the festival audio techs was ensuring they were able to abide by strict sound levels outside of the venue, while not sacrificing the quality and depth of the sound coming from the stages. Excision commented: “Working with a company like PK who is focused on delivering the best possible sound for the venue regardless of how many speakers are required fits perfectly with our vision for Lost Lands.”

Pace concluded: “I loved how the directivity of the sound was so precise with Trinity. We were able to go through the event without any complaints, even though we were hitting some high SPL levels.”