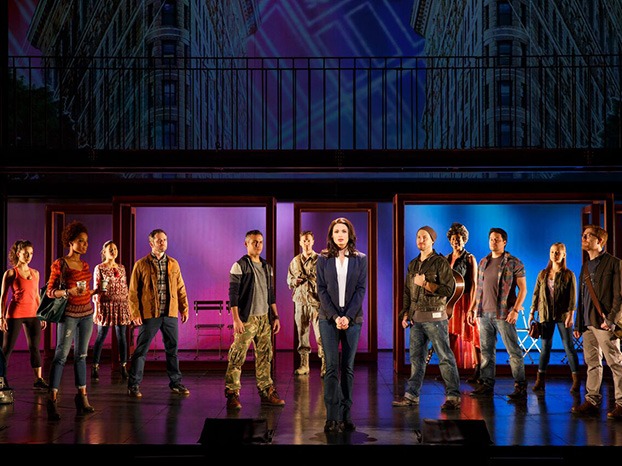 Working with event technology provider WorldStage, Projection Designers Peter Nigrini and Dan Scully implemented a unique LED video design comprised of 22 FLEXCurtain HD LED screens from PixelFLEX on the inaugural tour of musical, If/Then.
“I have worked with the design team behind If/Then for a number of years, and the idea for the redesign of the tour was really driven by the wonderful impossibility of the original Broadway production,” began Nigrini. “The original design had a large 36ft by 20ft flying, tilting mirror which was absolutely fantastic, but there was no way it could go out on tour. As a result, there had to be a dramatic redesign to create an equality dynamic if much different production. After consulting with WorldStage, we decided to use a combination and video projection and 22 FLEXCurtain HD LED video screens to help replace the mirror element.”
The FLEXCurtain HD is an ultralight, flexible LED wall that weighs 60-90% less than other large LED screen options and is available in an array of custom sizes. Using the PixelFLEX quick-lock system, the FLEXCurtain HD can be easily set-up and broken-down, and it accepts video and photo content from any DVI-D source.
“WorldStage does a lot of work in the theatre industry and we often work with projection designers who come to us looking for assistance in identifying the ideal technology that will most advantageously help them achieve their designs,” added Lars Pedersen, WorldStage Director of Emerging Technologies.
“When deciding upon the use of the FLEXCurtain HD, we looked at it from both the designer and production management perspectives, and it was really the best fit for both. On the design side, it had the correct imaging capabilities and was the right size; and then from the production perspective, it was easy to set-up and occupied a small footprint in the truck. It was ideal in all aspects and its working great for the If/Then tour.”
“On tour, the video system (and everything else for that matter) has to load-in quickly and truck space is always a concern,” agreed Scully. “We ultimately chose to use the FLEXCurtain HD because it could handle all the visual design elements, but could also handle the physical demands associated with a touring production while maintaining a reliable performance night-after-night.”
With the FLEXCurtain HD now in the video design, Nigrini and Scully got to work designing the content that would work in conjunction with the HD rear video projection also used on stage.
“As we started to explore the difference between the FLEXCurtain HD LED video content and the HD projection content, we needed contrast,” explained Scully. “While the overhead, rear projection images are very sharp and clear, we are using the FLEXCurtain HD in conjunction with a diffusion panel to create softer images with motion and animation directly behind the performers. A lot of what we have created for the tour is governed by the desire to keep the design aesthetics as close the original production as possible, and the diffusion panel in front of the FLEXCurtain HD gives a wonderful feeling of frosted glass which keeps the actors at the centre of our attention.”
Looking back, both Pedersen and Nigrini are confident that the decision to use the FLEXCurtain HD in the redesign of the original production was not only to right choice, but was also the obvious choice.
“When we first started looking at curtain-type LED products to use, we did not find anything that was truly comparable to the FLEXCurtain HD,” admitted Pedersen. “As it relates to touring productions, the beauty of the FLEXCurtain HD really comes down to how easy it is to set-up and the small amount of truck space needed to transport it. Both of these are a premium advantage for any touring company, and while this may have been my first time working with PixelFLEX, it certainly will not be my last.”
Nigrini concluded: “Long before a projection designer can begin to make decisions on what the video content of a show will be, many decisions have to be made about the type of video products that will be used. If you make the choices correctly, you can really do something beautiful, but if you make the wrong choice, there is no content that will be able to save you. The fact that the FLEXCurtain HD was able to hit all our targets of image quality, portability, ease-of-use, and reliable performance made it an obvious choice for this production, and we could not be happier with the video design of the If/Then tour.”
www.pixelflexled.com