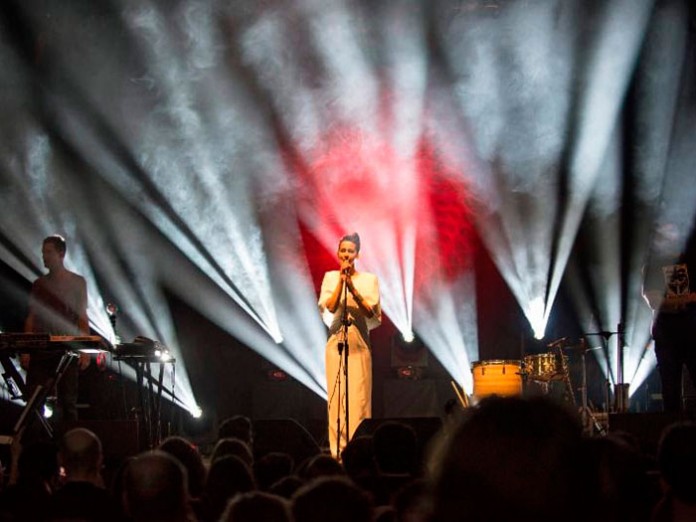 Philips Lighting, a Royal Philips company and global leader in lighting, announces that the latest addition to the Philips Showline product range, the SL HYDRUS 350, has made its pre-launch debut at electronic duo Lamb’s concert during the Convergence Sessions festival.

The festival ran from the 13 to the 19 March at venues across London including the iconic Roundhouse and art deco Troxy. Now in its third year, Convergence spans different genres of music and celebrates visual artists and pioneering technology. Lighting designer Mark Wynn-Edwards, who has worked with the band for nearly two years, specified 11 of the brand new moving lights to add super bright beam effects to his stripped back design.

“My concept for Lamb is always less is more, playing with black and white and minimalist looks,” explained Wynn-Edwards. “When the opportunity came to preview the Philips Showline SL HYDRUS 350 before it hits the market I jumped at the chance, especially since the festival embraces new technology.”

The Philips Showline SL HYDRUS 350 is a multi-featured LED luminaire that is ideal for the live event and TV market because of its small size and speed. Feature-packed with a wide zoom range in each mode, the Philips Showline SL HYDRUS 350 offers a vibrant colour pallet and features all the tools a designer needs to create mid-air effects, clear and precise projection as well as seamless blended animated washes.

“The SL HYDRUS 350’s beam and output is awesome,” continued Wynn-Edwards. “I also like that you can go from a tight gobo look, to a wide saturated wash and back to the tight beam in an instant. A whole rig doing that simultaneously would make for a really amazing effect. It’s like three lights in one, which is very clever.”

“I am really looking forward to seeing the final version of the SL HYDRUS 350. I think it’s going to blow people away,” said Wynn-Edwards.

Also adding a punch to Wynn-Edwards’ design was four of the ever-popular Philips Showline SL NITRO 510C and 510 LED strobes. “The strobes add extra punch to the clean white moments. They’re super bright and intense yet consume very little power so feature in almost all of my designs,” he explained.

Lamb played the Troxy on 17 March with supporting acts Darkstar and Montreal-based Maotik and Metametric who presented an A/V performance ‘Omnis’.