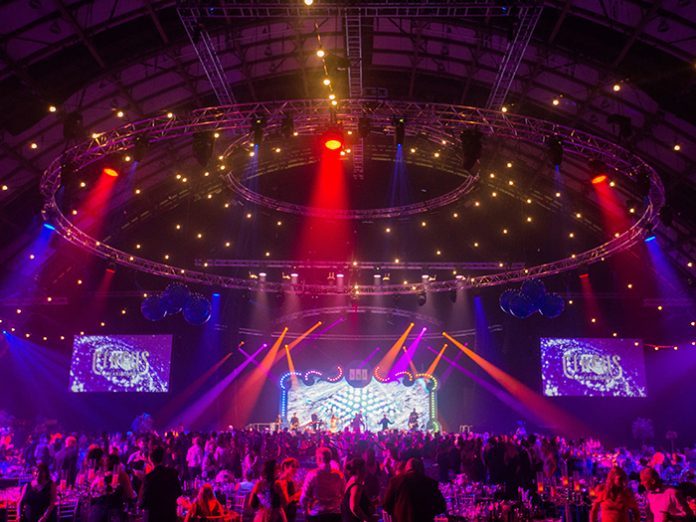 BGL Group is a financial services company based in Peterborough and the biennial event which celebrates and rewards staff achievements, was also part of the company’s 25th-anniversary celebrations.

Pearce Hire’s project manager John Huson provided some insight into the support and co-operation between Hawk and Pearce Hire: “Hawk Audio Visual has been a client of Pearce Hire for over 20 years and during that time we’ve actually partnered with them on four previous BGL Balls alongside many other events which usually averages 15 to 20 jobs every year. Hawk Audio Visual was the main technical producer for the BGL Ball – we supported them by providing lighting, audio and staging equipment and a dozen crew members on site.”

The brief was a simple, yet challenging one – to produce an event which was both visually stunning and sounded great, and all to be worthy of the desired circus theme.

As well as project managing for Pearce Hire, Huson was appointed as the BGL Ball lighting designer, a challenge which he relished. With the evening combining many elements of dining, awards presentation, circus cabaret performance and live music, his design had to be flexible and adaptable to each aspect of the evening.

“I wanted to create a high octane, glittering lighting design to complement the circus and gymnastic performers who were going to be on stage and entertaining guests around the room. We needed to create a real ‘wow’ factor for everyone attending this celebratory evening.”

Essentially LED technology was at the heart of the lighting design and to produce the look that John was seeking to create. “We drew on our significant stock of Robe Pointe and Robe 1200 LEDWash fixtures, alongside our recent investment in the new Vari-Lite VL2600 Profile fixtures to provide the key elements of the lighting design for the main stage area,” explained Huson. “It was also an opportunity for us to use the Robe RoboSpot system for the powerful BMFL fixtures being used for the live circus performances. The overall lighting control was operated from Chamsys across the event.”

With over 200 Robe and Vari-Lite fixtures as the main work horses on the rig for staging and effects lighting throughout the evening, additional effects lighting was provided by Ayrton MagicBlades.  The bar and VIP areas were a mix of Martin MAC 700 Profiles, SGM P-5 washlights and i-Pix BB4’s.

Huson explained how the ‘big top’ atmosphere was created, commenting that: “It was actually one of the simplest elements of the lighting design as we used a substantial amount of festoon lighting strung between trusses to create a domed big top effect. Each individual string of festoon was individually controllable to produce some dynamic effects. The festoon was a mix of dimmable warm white LED lamps and also some Glasson RGB LED digital lamps which were built into the LED screen surround and pixel mapped as part of the key look of the set.”

From an audio point of view the remit was to provide audio suitable for a traditional awards show whilst also ensuring suitable reinforcement for the after dinner band, and pre and during dinner circus performances. “It was quite a challenge” smiled Huson. “Essentially we had three different, independent audio systems on the go throughout the evening – one for the main room (which had to be multi-purpose as outlined above), alongside separate systems for the VIP reception area and the bar area – both of which had background music requirements and live circus performances. The audio was controlled throughout the event from Yamaha, networked by Dante, and in total we installed x84 L-Acoustics loudspeakers and operated from x28 channels of RF.”

The staging demands were also complex with over 200 metres of curved truss and 410 metres of standard truss being specified, with 79 rigging points installed by KRS, alongside a significant amount of Pearce Hire’s Prolyte Litedeck units, plus almost 2,000 metres of drape from the Pearce Hire inventory.

As is often the case with corporate events, the timescales the production team were asked to work to were testing, with just 12 hours for load-in, followed by intensive rehearsals on the day of the event itself.  Load-out was achieved within a six-hour timeframe. “The pre-planning and pre-programming was an essential element to the successful delivery of this event, on time, and in time. But we managed it” commented Huson.

Marcus Lawday from Hawk Audio Visual is clear why they choose to work with Pearce Hire: “With our long-standing partnership with Pearce Hire, we wouldn’t go anywhere else! It’s always a pleasure to work with their team. The circus theme warranted an imaginative lighting rig and creative truss formations and the festoon lighting design introduced by John helped draw the guests into the performances happening around them. It was a challenging brief, delivering specific expectations drawn up by our client, along with the strict budget and limited build time.  The Pearce Hire elements of the production were delivered on budget and to an exceptional standard, and the client was delighted.”

Huson added: ‘It was a challenge as corporate events always demand the highest production levels and last minute changes aren’t uncommon, but we were delighted with our contribution to the overall production. It was a pleasure to be involved and we look forward to future collaborations with Hawk Audio Visual in 2019.”