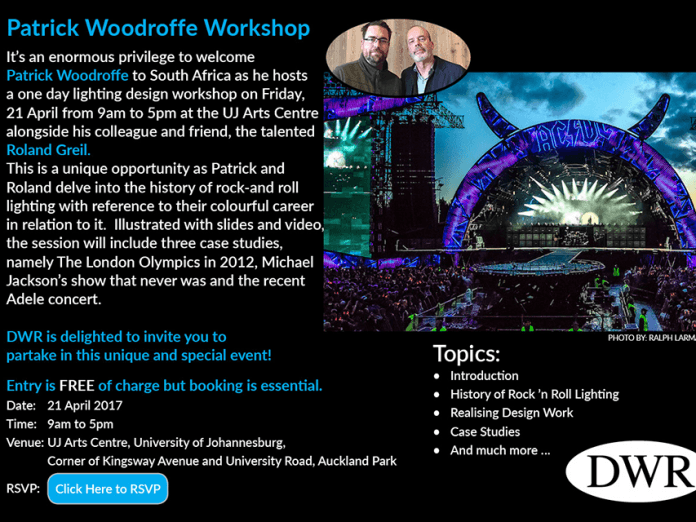 DWR Distribution along with our media partner Pro-System, is pleased to announce that Patrick Woodroffe will be hosting a one day lighting design workshop on Friday, 21st April from 9am to 5pm at the UJ Arts Centre alongside his colleague and friend, the talented Roland Greil. Bookings have been overwhelming and there are only a limited amount of seats available.

This is a unique opportunity as Woodroffe and Greil delve into the history of rock ‘n’ roll lighting with reference to their colourful career in relation to it. Illustrated with slides and video, the session will include three case studies, namely The London Olympics in 2012, Michael Jackson’s show that never was and the recent Adele concert.

Woodroffe is a legend in his time, having lit and directed for artists such as The Eagles, Lady Gaga, ABBA, Bob Dylan, The Police, The Rolling Stones, Simon and Garfunkel to mention a few. He has lit productions for opera, ballet and dance including Vienna State Opera and Finnish National Opera where lighting took the place of the scenery. With a career that started in the mid-seventies, Woodroffe’s work has been extensive and it’s near impossible to list it all, but he has lit Les Miserables and Phantom of the Opera 25th Anniversary Concerts for Cameron Mackintosh, the Queen’s Jubilee concert in 2002 and lighting for Vanity Fair Oscar parties in Los Angeles for the last 20 years!”

Greil is a freelancing lighting programmer, lighting designer and lighting director who is no stranger to South Africa, having presented the Bigger Picture Video and Lighting Workshop at DWR Distribution a year ago. Greil is a multi-talented and passionate individual who has been responsible for the realisation of a variety of demanding projects and has worked closely with international artists and on productions worldwide.

DWR Distribution invites anyone interested to join this unique and very special workshop.