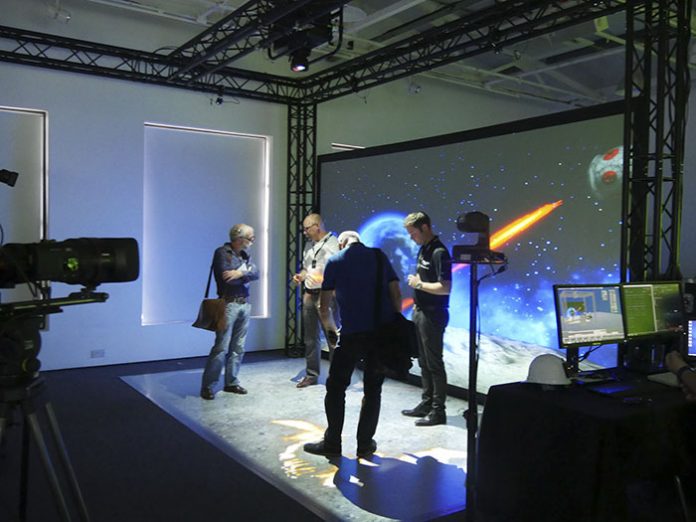 Painting with Light continues its active collaboration with Panasonic through the current European Media & Entertainment Roadshow initiative which is showcasing the brand’s latest, high-powered projectors.

The projectors work in conjunction with three cutting-edge technologies that the Belgian creative design practice has invested in and is using in innovative ways.These are BlackTrax remote tracking, d3 high performance media servers and Notch real-time interactive video content.

The specialist technical and programming skills needed to optimise and run these systems are also being provided by Painting with Light and the overall project is being managed for them by Wouter Verhulst.
This creative / technical partnership was first seen at the Integrated Systems Europe (ISE) exhibition, Amsterdam in February, where Painting with Light’s Creative Director Luc Peumans initiated a fully choreographed and directed live show, demonstrating simultaneous tracking and projecting onto multiple objects.
It was the first time that a combination of live tracking and projecting onto flying objects had been achieved using d3 and BlackTrax technologies.
Panasonic’s Visual Systems Europe Marketing Specialists Hartmut Kulessa and Thomas Vertommen, were also integrally involved in the whole project and saw several other potential applications for this model.

The live show at ISE was a massive success, creating lots of engagement and interest, so a re-scaled version was fine-tuned and presented two months later on the Panasonic stand at the 2017 Prolight+Sound expo in Frankfurt.Once again, it was extremely well-received and proved a big hit with the public.
Now, the same show is touring throughout Europe as an integral element of Panasonic’s Media & Entertainment Roadshow, which started in Birmingham, UK and is scheduled to visit at least 12 key European cities.

The technical setup features a BlackTrax system with six infrared cameras and five active beacons, all rigged on a ground-supported structure, plus a d3 4x4pro media server.

The cameras pick up the IR signals emitted by the beacons and send the coordinates to the d3 server via RTTrPM (Real-Time Tracking Protocol for Motion). This matches up and tracks video content in real time.
Three d3 outputs are utilised – one for the back, feeding a PT-RZ31K projector; the second for the front, feeding a PT-RZ12K and the third sending signals to the all-new PT-RZ21K 20.000 lumen laser projector.

Different objects are tracked – including a helmet, a wand, a plate and two people – through a total of six scenes with varying levels of content and interaction. The show also features special video content created by Painting with Light, using Notch and other software, showing the power and flexibility of these systems working together.

The show demonstrates the precision, detail and clarity of the projection in challenging live situations, working in the context of the immediate environment and it also illustrates how a number of symbiotic technologies can be harnessed and utilised in fun and engaging ways. The live part is followed by a short technical demo on the tracking / mapping, then a Q&A session and Roadshow guests are also invited to take a closer look at the setup.